Earthquakes make the ground shake and as the rocks break, their ruptures generate acoustic waves in Earth's atmosphere that are inaudible to humans at frequencies of less than 20 Hertz. However, microphones near and far—even thousands of kilometers from the rupture—can hear this low frequency cacophony of infrasound waves. Such acoustic signals also tear through the air when a meteorite or other bolide collides with Earth, when volcanoes erupt, and even when planes emit sonic booms over the ocean.

To better understand how the ground interacts with the air during an earthquake to create an atmospheric earthquake signal, researchers at Nanjing University, led by Minghan Yang, studied a pair of magnitude-6.2 earthquakes that occurred within two hours of one another in about the same location, near Alaska’s border with the northwestern part of British Columbia on May 1, 2017 (Figure 1). Separated by less than 10 kilometers, this doublet of earthquakes featured a reverse event and a strike-slip event.

Repeating earthquakes produce "repeating infrasound signals", says study corresponding author and geophysicist Tao Wang. Because these twin earthquakes occurred near one another in both time and space, the team didn’t have to worry about changes in atmospheric conditions. And because each earthquake had a unique source—one was reverse, the other strike-slip—the team could extract information about whether certain infrasound signals could help differentiate between the two. Such information could help scientists study other inhospitable planetary environments, like Venus. 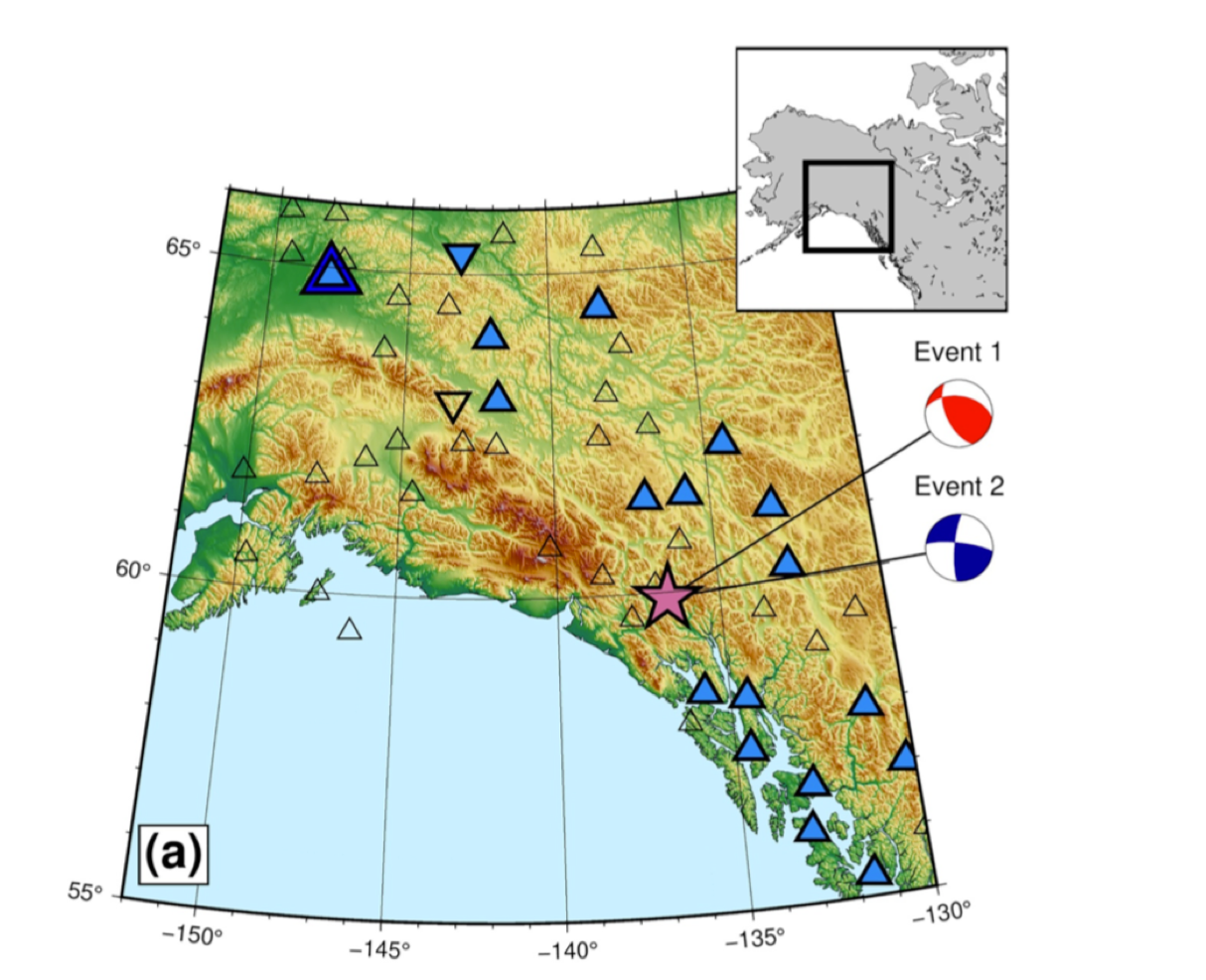 Figure 1. Topographic map of southeast Alaska (see inset) showing the location of the earthquake doublet (star with beachballs showing each event’s behavior) and the seismic stations (triangles). Blue triangles denote USArray stations used in this study. Open triangles signify USArray stations that were not included in this study. A big blue triangle indicates the Array I53 stations.

Waves in the atmosphere

Three types of infrasonic waves occur during earthquakes, and they’re related to the surface waves that follow an earthquake’s initial P- and S-waves. Surface waves like Rayleigh waves  and Love waves roll the ground as they pass, and though they travel slower than those first seismic shocks, they still travel faster, about 3.5 kilometers per second, than the speed of sound, about 0.3 kilometers per second.

Imagine an infrasound sensor located hundreds of kilometers away from an earthquakes’ epicenter. As Rayleigh waves roll by, pressure changes in the atmosphere will manifest as local infrasonic waves, captured almost immediately by the waiting sensor. Trailing that local signal, epicentral infrasonic waves—those produced by atmospheric pressure changes where the earthquake began—trickle in at the speed of sound. A third type, called secondary infrasonic waves, consists of two parts, says Wang. The first component rapidly propagates through Earth at the speed of surface waves, but then transfers to acoustic waves that must travel slowly through the air to the sensor. “On average, the speed of the [secondary infrasonic] is faster than that of the [epicentral infrasonic],” says Wang, “but which one appears earlier on infrasonic records depends on the location of seismic-to-acoustic conversion.” This means that if the infrasonic sensor is far from where the conversion from earth to air happens, the secondary infrasonic waves could trail their epicentral infrasonic relatives. And for any infrasound that must navigate mountainous regions, the interaction of these sound waves with topography isn’t well understood.

Further complicating all three infrasonic waves is an earthquake’s focal mechanism —whether the earth stretches apart, shoves together or slides one side of a fault past the other. In other words, how the ground moves might affect the resulting infrasonic sounds, but figuring out just how can be tricky. Doublets can help.

When earthquakes occur at nearly the same time, ever-changing atmospheric winds and turbulence aren’t likely to be that different. And when they occur in nearly the same place, the ups and downs of topographic relief that can bend and echo infrasound signals will affect the secondary infrasonic and epicentral infrasonic waves in the same ways. In other words, the purpose of using the doublet is to exclude both path effects and atmospheric changes, says Wang, allowing the team to focus on the coupling between rock and air.

For the Alaskan doublet, several stations recorded the infrasonic waves, including eight stations from Array I53 and 18 individual USArray stations (Figure 1). After processing the data, the team identified local infrasonic waves (the ones that appear first), with an apparent velocity of about 4 kilometers per second—about the same speed as seismic waves, as expected.

Secondary infrasonic waves produced by the interaction between surface waves and topography appeared about 700 seconds (nearly 12 minutes) after the earthquake, with an average velocity of about 0.4 to 1.1 kilometers per second. Last, the epicentral infrasonic waves appeared about 36 minutes after the earthquakes ruptured, traveling at about 0.22 to 0.36 kilometers per second. This final signal lasted nearly twenty minutes.

In physics, frequency tells you how many waves pass by a fixed location in a given amount of time. High frequency waves have their peaks very close together, like the jagged edge of a mountain ridge, whereas low frequency waves undulate like low-lying foothills, each mound spaced far from the next.

The team found that only certain frequencies of ground motion—between 0.9 and 2.1 Hertz—efficiently transferred infrasound pressure waves into the atmosphere. Moreover, they noted that topographic relief—how high mountain peaks are relative to valley bottoms—dictates how this coupling between rock and air occurs. “Infrasound might be caught by great relief, and cannot be detected,” says Wang, when queried about how infrasound can escape the ups and downs of mountains between epicenter and sensor. “This is what we call frequency dependence,” he explains. “Only seismic waves in proper frequency band[s] can be transferred into distantly detectable acoustic waves efficiently.”

Perhaps most useful to those who study other worlds, the team found that the secondary infrasonic waves mimic seismic waves at each station, which might help differentiate what type of earthquake occurred.

“Due to [the] terrible environment on Venus’s surface, it’s very difficult to deploy seismometers to study the interior,” says Wang. Past efforts, like the Soviet Venera 13 and 14 probes, lasted for minutes before succumbing to the harsh pressure and temperatures. Seismometers would help to obtain information about the interior of Earth’s twin (at least in size).

To skirt this problem, scientists seek to deploy acoustic sensors via balloons that can float in Venus’s atmosphere to capture infrasonic signals caused by “Venus-quakes,” says Wang. “The thick Venus atmosphere may result in a better air-ground coupling,” he explains, which means the infrasonic signals would be easier to detect. In this way, ground-truthed information from earthquakes like the Alaskan doublet could help unravel the types of movements occurring under Venus’s harsh, heavy atmospheric blanket.