Untangling the rupture of the 2021 M7.2 earthquake in Haiti

On the morning of January 24, 2022, two aftershocks of the 2021 magnitude-7.2 Nipps earthquake struck western Haiti. Both aftershocks were caused by movement on reverse faults, but the 2021 Nippes mainshock was likely more complicated.

In a paper published recently in Geophysical Research Letters, Ryo Okuwaki, a seismologist at the University of Tsukuba and Wenyuan Fan, a seismologist at Scripps Institution of Oceanography, explored this notoriously complex area, finding that the 2021 Nippes rupture likely reflects the complicated plate tectonics. Understanding these details will help mitigate damaging earthquakes certain to strike in the future.

The Caribbean island of Hispaniola, located between Puerto Rico and Cuba, hosts two countries—the Dominican Republic to the east, and Haiti to the west.

Video from IRIS outlining the tectonics and recent earthquake history of Hispaniola.

As these tectonic plates interact, most of the motion is lateral, which means that the plates grind past one another, similar to California’s famed San Andreas fault. However, in these island-pocked seas, the North American plate moves westward relative to the Caribbean plate in what geologists call left-lateral strike-slip motion, opposite to its California cousin’s right-lateral movement.

Because the plates in Hispaniola also come together at an angle, the motion isn’t entirely lateral. Instead, the subtle push between the plates toward one another causes the ground to move upward, explaining the existence of this island.

The faults that break through Earth do not always align themselves with how the tectonic plates appear to be moving at present day, which means that possible planes of movement can be hidden from geological measurements until they unexpectedly break. This surprise can be devastating, like the 2010 earthquake that tore through Haiti and caused the deaths of well over 100,000 people, highlighting the importance of finding such faults.

To understand how the 2021 Nippes earthquake propagated, Okuwaki and Fan turned to publicly available data hosted by the IRIS DMC, using the Wilber 3 event selection system and irisFetch tool to access necessary information. They used these data to explore the earthquake primarily via two methods—back-projection and finite-fault inversion.

Back-projection, says Okuwaki, can track the rupture front of an earthquake, helping seismologists follow both the direction and speed as an earthquake progresses, without making too many assumptions. The way this works, he says, is by chasing the P-waves, which are the first seismic waves produced in any break. As the rupture propagates, those waves will arrive sequentially at seismic stations, allowing seismologists to reconstruct where and how fast the rupture propagated. However, back-projection, he says, “is limited to show what is happening behind [the] rupture front.”

Moreover, back projection does not solve for absolute values of slip, but instead provides a relative measure of the strength of the waves that radiate from their source, says Fan. Back-projection effectively exploits higher frequency data in the seismograms that are difficult to model by other methods.

The second method, finite-fault inversion, can estimate how much, and in which direction, blocks of rock moved once they’ve broken, says Okuwaki.

This method typically uses lower frequency seismic data, along with other data from satellites and tsunamis (if such data are available), and these models often lack the details provided by back-projection, says Fan. “Finite-fault inversion removes the wave propagation effects from the [seismic] records to obtain a slip model, which characterizes both the strength and location,” he explains.

However, this method requires several assumptions (called priors), including the extent of a given fault both horizontally and vertically, the orientation of that fault in the subsurface, the maximum speed at which the rupture propagated, and how long the fault moved (duration of total slip). “Those assumptions,” Okuwaki says, are “hard to know, especially for the 2021 Haiti earthquake, which may have ruptured blind or unknown faults.” Without good priors, fidelity of the models could be challenged, he says.

Back-projection requires fewer assumptions, and in fact provides good priors for the finite-fault inversion, says Okuwaki. “We need both the methods to fully understand the rupture process of the earthquakes,” he says, which is why he and Fan refer to their strategy as “integrated seismological analysis.” In the case of the 2021 Haiti earthquake, back-projection found the rupture extent, direction and speed. These findings guided the finite-fault model that explored how the fault moved, as well as how much movement happened along different segments at different times (distribution of slip). 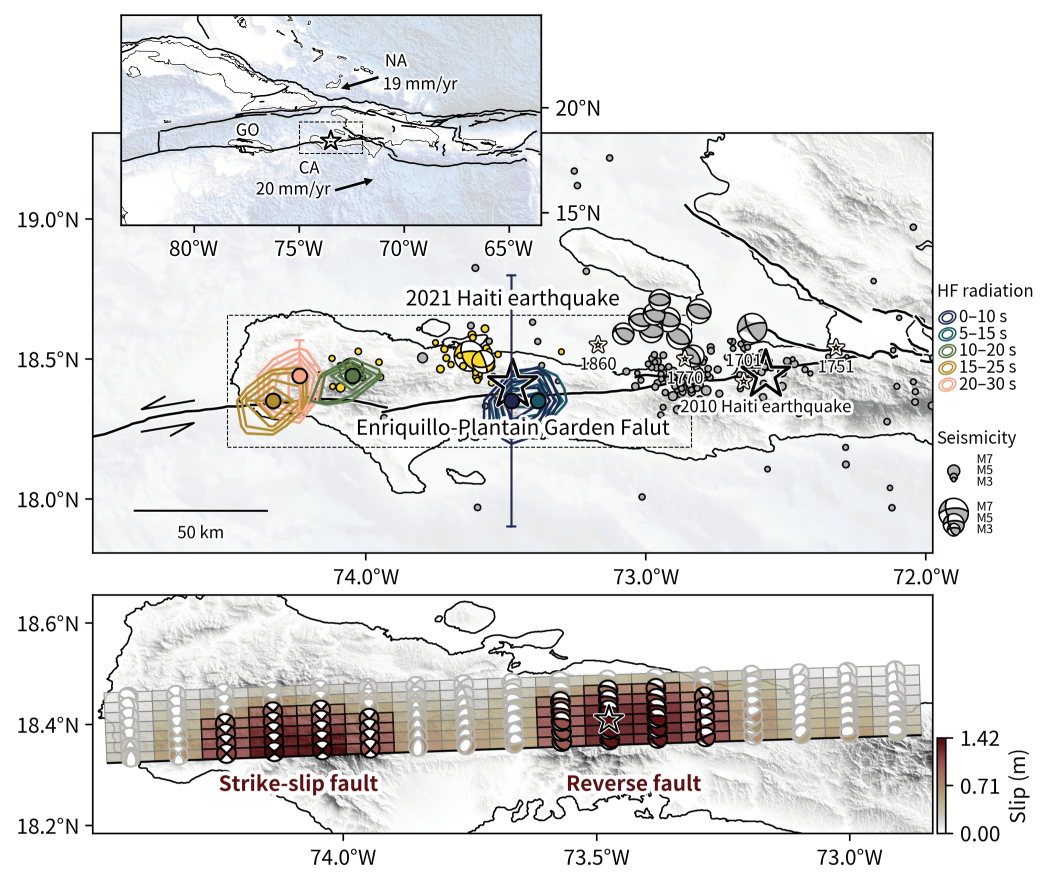 Figure 1. The inset above the two main panels shows the regional tectonics of Hispaniola, with the rectangle delineating the location of next panel. Black lines show the plate boundaries and other mapped faults. Arrows show the relative plate velocity vectors between the Caribbean (CA) and the North American (NA) plates against the Gonâve (GO) microplate. The star shows the epicenter of the 2021 Haiti earthquake. In the next panel, contours colored by time after rupture initiation show the back-projection results. Stars outlined in black show the epicenters of the 2021 and 2010 Haiti earthquakes. Black stars with white outlines show historical earthquakes. Gray circles show background seismicity, and the yellow dots are the 1-month aftershocks of the 2021 Haiti earthquake. Gray and yellow beach balls show available focal mechanisms [11] of events before and after the 2021 Haiti earthquake. Thick black lines show active faults in the region. In the lower panel, colored cells show the finite-fault solution. Large slip patches (>50% of the maximum slip) are emphasized by black cell borders. The beach balls show focal mechanisms of the faulting.

An intriguing outcome of this research is the finding that this earthquake caused two disconnected faults to rupture, as hinted by the satellite data.

Specifically, the rupture mostly propagated in a single direction—westward—with back-projection finding two discrete bursts of seismic energy. The first burst occurred during the initial 10 seconds of the earthquake, whereas the second burst occurred about 60 kilometers away, beginning 15 seconds later. Because of the apparent spatial gap between these two distinct emanations of seismic energy, Okuwaki and Fan interpret the earthquake as involving two subevents.

Loaded with this information from back-projection, the finite-fault model found two patches of slip. One patch centered near the epicenter, and showed reverse faulting along an east-west striking fault with a relatively steep dip (around 60°). The second patch, located where the second seismic burst occurred, appeared to be a vertically dipping strike-slip fault.

Together, these techniques show at least two discrete rupture episodes. For the first ten seconds, the earthquake slowly tore a reverse fault within about 20 kilometers of the point where the earthquake nucleated. After a pause, a second strike-slip subevent began in the western part of the model, about 60 kilometers away from the epicenter. This second, speedy westward-moving shock lasted for nearly 30 seconds, only decelerating rather suddenly toward the end.

The first subevent likely ruptured a blind thrust fault, which means that the fault does not break the surface, instead hiding until people feel its presence when it moves. The second, strike-slip subevent appeared to branch away from the known Enriquillo-Plantain Garden fault zone, rupturing previously unknown secondary faults.

This varied style of faulting for a single earthquake is likely the result of the awkward angle at which the two tectonic plates converge, according to Okuwaki and Fan, who call these torturous, sporadic paths that may rupture together “intertwined fault system[s].” The initial reverse fault, they say, occurred because of compression as the plates push together, but the second strike-slip subevent might have originated from movement of the Gonâve microplate that’s stuck between the Septentrional fault zone to the north, and the Enriquillo-Plantain fault zone to the south.

A tangle of triggers

Faults that do not physically link together in the subsurface may still interact with one another during an earthquake, like these two segments in Haiti, separated by 60 kilometers and about 10 seconds of rupture. Seismologists typically consider two different mechanisms—dynamic or static triggering.

Dynamic triggering, says Okuwaki, is a mechanism in which passing seismic waves induce changes in stress or other factors affecting rock strength, thus triggering earthquakes. Such triggering is most obvious when the triggered earthquakes are far from the earthquake that caused the initial stress-altering seismic waves, often at distances greater than several rupture lengths, he explains. This also usually happen soon after the initial earthquake—on the order of tens of seconds to several hours, though such effects could last for days.

“At the moment, we still do not know the precise physical mechanisms of dynamic triggering,” says Fan. “We observe correlations between the seismic wave arrival and the occurrence of earthquakes.” This correlation suggests that passing waves directly cause upticks in seismic activity, but other convoluted processes could be at play.

On the other hand, a statically triggered earthquake occurs nearby, and could be considered either an aftershock or a nearby sub-event that ruptures as a result of the change in static stress, says Okuwaki. Such events can happen days to years after the initial earthquake.

In the case of the 2021 Haiti earthquake, the question at hand is how the initial reverse faulting might have affected the secondary strike-slip faulting. By calculating Coulomb stress changes, which are changes in the balance between different types of stress and friction, scientists can see how neighboring faults might be affected by earthquakes, explains Okuwaki. In doing such a calculation, Okuwaki says that the stress change from the first, reverse subevent was unlikely the sole cause of the secondary strike-slip break. Interestingly, seismic waves from the first subevent coincides with the occurrence of the second, which would suggest a dynamic triggering relationship.

However, because they were only able to use data from distant seismic stations (called teleseismic stations), Fan cautions that their models can have large location uncertainties.

Because of Haiti’s location at the nexus of a complicated plate boundary, earthquakes are expected. In 1770, the Port-au-Prince earthquake destroyed Haiti’s capital, and may have released most of the strain on the faults near the reverse subevent from 2021.

Calculations indicate that since that catastrophic quake in 1770, about two meters of strain have built up as the plates push past and against each other. According to Okuwaki and Fan’s calculations, the 2021 reverse subevent caused only about 0.3 meters of boundary-parallel movement, suggesting that additional movement must happen before the fault fully relaxes to begin its cycle anew.

An additional worry is that earthquakes that rupture complex fault networks such as the 2021 event tend to produce stronger, higher-frequency ground motion, which often cause most destruction. This means greater seismic hazard for those who live in Haiti.