To explode or not to explode: Earthquakes may hold the answer

By: Alka Tripathy-Lang and Wendy Bohon 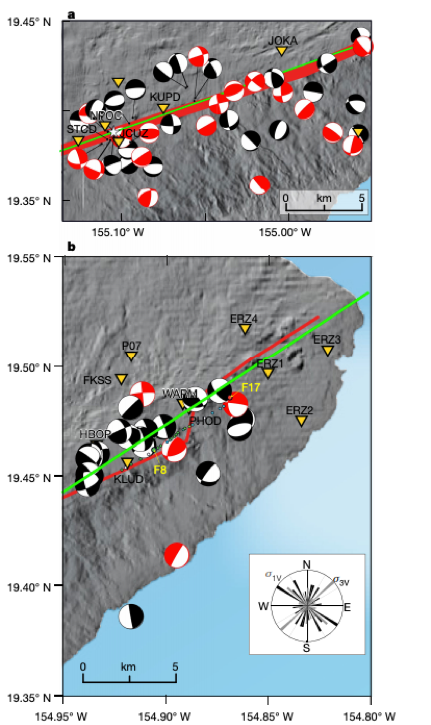 Before lava breaches the surface, it's called magma. Magma's viscosity—the ease with which it flows—dictates whether lava flows like water or molasses (the syrupy kind, not the geologic one). If magma has a high viscosity, it will rapidly congeal and travel neither far nor fast. Such magma also tends to trap more gas, which can result in more explosive eruptions, says Diana Roman, a staff scientist at Carnegie Institution for Science. On the other hand, the lowest viscosity, thin magma can emerge as a molten river of lava that spreads out quickly over a large area, though it may be less explosive. Each type of lava poses unique problems to nearby populations.

Until now, scientists could not determine the viscosity of magma before an eruption, making hazard assessment difficult. In a recent publication in the journal Nature, Roman and her colleagues examined numerous earthquakes that accompanied both types of lava emissions during the 2018 Kīlauea eruption in Hawaii. They found that during the early stages of the eruption, when more viscous lavas appeared, the direction of slip during earthquakes took on a distinct orientation, rotating 90 degrees relative to later events. Roman and colleagues suggest that by using the slip orientation of earthquakes as a proxy for magma viscosity, scientists could provide more time to emergency managers trying to limit harm to people and property.

From Kīlauea’s summit caldera, two rift zones radiate outward. One heads to the southwest, and the other trends east. Recent activity has been localized along the eastern rift, especially at Pu‘u ‘Ō‘ō vent, which began forming in 1983 and didn't stop until the 2018 eruption. In March of 2018, the Pu‘u ‘Ō‘ō vent experienced inflation, which means subsurface pressure increased, causing the surface to tilt. In April, Pu‘u ‘Ō‘ō collapsed.

An earthquake swarm began on May 1, 2018, slowly migrating down the eastern rift. Satellite data showed that underground magma was pushing through the lower East Rift Zone. On May 4, fissures began to open in the Leilani Estates subdivision, oozing high viscosity lava.

Scientists collected lava samples upon eruption, testing them for composition, crystal content, melting temperature and other factors that influence viscosity. The early lavas had high crystal contents, and were more “evolved," which means that their composition had moved away from hot, fluid basaltic lava toward cooler, thicker andesitic lava. Though such lavas can have a higher potential for explosive action, this was not a major issue during the 2018 eruption, said Bruce Houghton, study coauthor and Hawaii's state volcanologist.

As the eruption continued, the emerging lavas became less viscous, less crystal-rich, hotter, and more “primitive,” which means their compositions hadn't changed substantially during their travel to the surface. “The risk was… higher for the low viscosity flows just because their runout distances were far longer," said Houghton. "Their 'footprint' was much larger."

Beachballs to the (future) rescue

A fault plane solution, also called a focal mechanism according to the U.S. Geological Survey, can be calculated for a given earthquake from data collected by seismic stations. Such data are available from the IRIS DMC.

One way to calculate a fault plane solution is to see whether a seismic station moved up or down upon arrival of the first seismic waves. This pattern of “first motions” across multiple seismic stations helps seismologists produce a beach ball-like diagram that indicates not only the orientation of the fault, but also the direction it moved during an earthquake.

By carefully calculating beachballs for earthquakes greater than magnitude-1.0 that occurred between Jan. 1, 2014 and Jan. 31, 2020, Roman and her colleagues detected curious changes in how these earthquakes evolved over time. As it turns out, Kīlauea has erupted only runny, low-viscosity basalt between 1983 and 2018. When examining the fault plane solutions from the beginning of the 2018 eruption— the time of high viscosity, crystal-rich lavas—Roman and her team found that the beachballs changed along with the lava. The beachballs rotated about 90 degrees. As the magma began to move and less viscous flows issued from fissures, the beachballs returned to their original orientation, though earthquake activity largely decreased.

The early, rotated fault plane solutions that corresponded with the early, goopy fissure eruptions could be showing scientists the subsurface movement of magma, according to Roman and colleagues. In their interpretation, magma transported to Pu‘u ‘Ō’ō between 1983 and 2018 stagnated, cooled and began to crystalize, forming a pliable underground barrier to the downstream lower East Rift Zone. As pressure in the system built and Pu‘u ‘Ō’ō experienced inflation, the barrier eventually collapsed in a ductile fashion, meaning it didn't trigger an earthquake.

With no impediment, these relatively newly formed magmas began coursing through the subsurface, picking up high-viscosity, stagnant magma lodged underground during prior decades or centuries. This combination magma, which included newer but evolved basalt and stale older pockets, erupted first. Then fresh, low-viscosity magma that no longer had any impediments rushed in, threading its way underground before pouring from fissures at the surface.

By rapidly identifying earthquakes with fault plane solutions at odds with the expected orientation, real-time earthquake monitoring by the Global Seismic Network and other localized networks, particularly permanent networks maintained by volcano monitoring agencies such as the USGS, could potentially provide valuable information about viscosity and associated hazards of future volcanic eruptions. Local seismic networks, Roman and colleagues argue, could be optimized as new stations come online. In Hawaii, for example, new stations installed off the rift axis would provide more robust data coverage for calculating beachball diagrams.

Though the 2018 Hawaiian flows, regardless of viscosity, moved slow enough for people to outwalk, the lower viscosity flows went further, posing a greater hazard in general, says Roman.

That said, Houghton points out that "slope [of the ground surface] was the key factor for all the lavas.” The greater the slope, the faster the lava flowed. The lowest viscosity flows simply flowed farther, he said.

Figure. 1. Maps showing the location of earthquakes, marked by “beach balls”, and the vents associated with the lower East Rift Zone eruption. The black focal mechanism are unrotated and the red focal mechanisms are rotated. The seismic stations are labeled with inverted yellow triangles and fissures as colored dots. Important fissures are labeled as F8 and F17, with color of dot denoting the composition emerging from each vent: red is andesite end-member, green is high-Ti end-member, blue is mafic end-member, white is not reported. The green lines indicate the location and strike of the dike used for Coulomb stress analysis. The red line shows the trend of the lower East Rift Zone.

Cover Image: from the USGS. "Map as of 10:00 a.m. HST, June 15, 2018. Given the dynamic nature of Kīlauea's lower East Rift Zone eruption, with changing vent locations, fissures starting and stopping, and varying rates of lava effusion, map details shown here are accurate as of the date/time noted. Shaded purple areas indicate lava flows erupted in 1840, 1955, 1960, and 2014-2015."