The MAGIC of multiple datasets in eastern North America

More than one billion years ago, a much debated landmass plowed into what is now eastern North America, driving up mountains that towered over the landscape. For several hundred million years, Earth’s single supercontinent, Rodinia, sat in the midst of a single ocean. But eventually, this supercontinent, maintained by the collisions driving all landmasses toward one another, tore apart.

Soon, the Iapetus Ocean stretched between the core of North America, called Laurentia, and other landmasses. This ocean existed for another several hundred million years until tectonic forces changed again, sending parts of modern-day Europe and Africa back toward Laurentia. Upon impact, the Appalachian mountains rose skyward, and this new continent eventually joined Pangea — the most recent supercontinent. Pangea remained stable between 335 to 175 million years ago until rifting rent the land in two, creating the Atlantic Ocean as North America moved westward and Europe and Africa went east.

“These two full cycles of supercontinent formation and breakup,” says Maureen Long, a seismologist at Yale, “involves this set of really fundamental plate tectonic processes like subduction, terrane accretion and continental rifting.” In a recent paper published in Seismological Research Letters, Long and her coauthors describe the MAGIC experiment — the Mid-Atlantic Geophysical Integrative Collaboration. The trove of data they produced allows them to see how these complicated tectonic process manifest at deep levels of the eastern margin of North America. By linking the deep structure with surface observations, Long says, “we can inform our views of the past processes.”

The MAGIC experiment (Figure 1), part of the Earthscope USArray Flexible Array, includes seismic and magnetotelluric stations deployed as a linear array across Virginia, West Virginia and Ohio. Including between 25 and 28 instruments of each type, data from the MAGIC deployment help characterize both the seismic and electrical conductivity structure of the crust and upper mantle beneath the central Appalachians. Both seismic and magnetotelluric data, collected from 2013 to 2016, are available from the IRIS DMC. The experiment was led by Long and her colleagues Margaret Benoit, then at the College of New Jersey, and Rob Evans, of Woods Hole Oceanographic Institution. 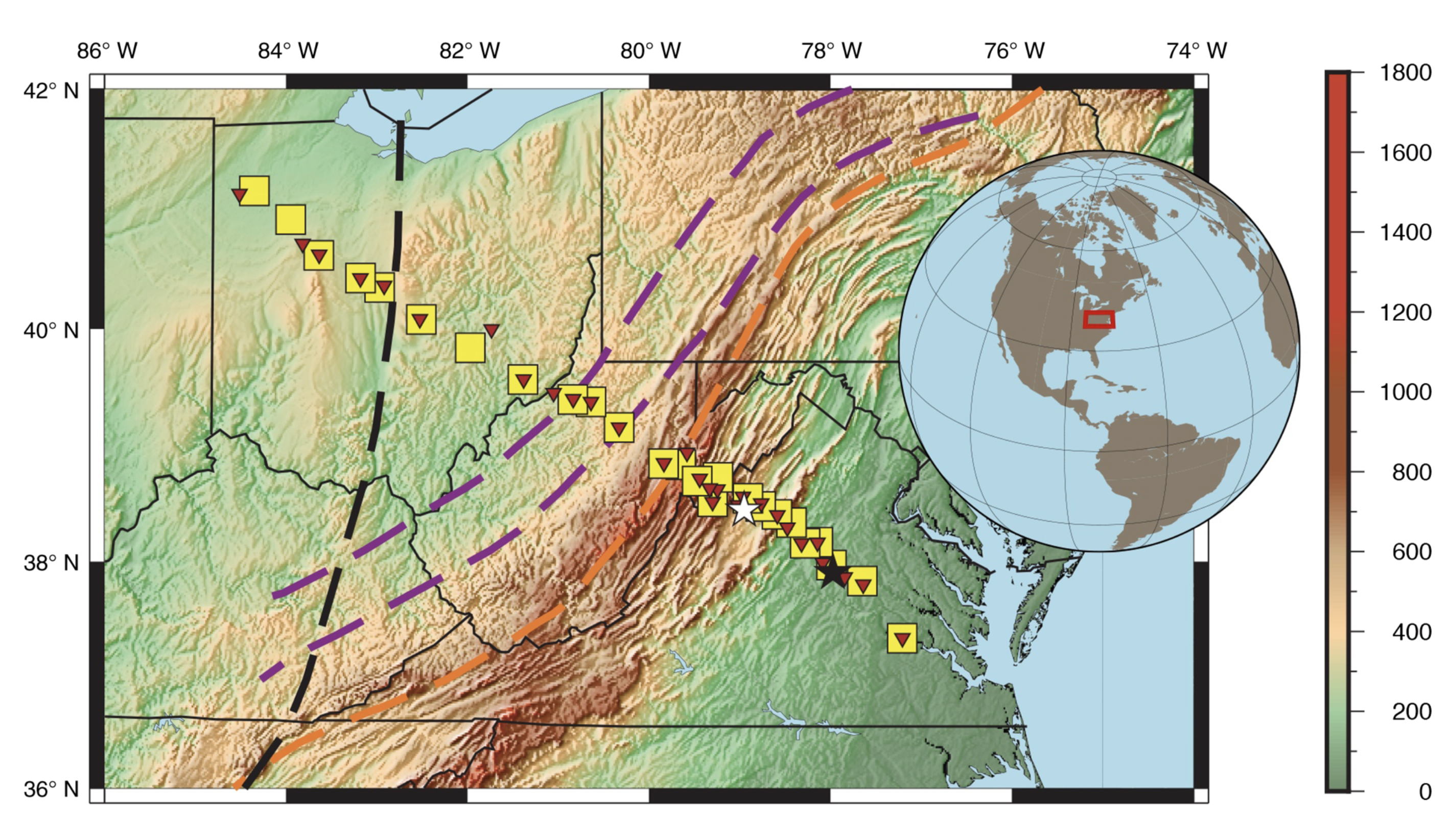 When possible, Long and her colleagues installed seismic stations on land owned by local businesses or nonprofit organizations willing to host stations, or on property linked to nearby universities. They relied on natural sources for seismic waves, like earthquakes.

Although the teams tried to install magnetotelluric instrumentation along with seismic stations when feasible, magnetotelluric stations can require different settings for optimal data collection. According to Long, a flat site is ideal, which can be difficult to find in mountainous terranes like the Appalachians. Densely populated regions with plentiful infrastructure like electrical lines, buried pipes, or metal fences can pose problems to magnetotelluric data acquisition, explains Long. “The more people that live in a region, the harder it is to find appropriate sites far from contamination of the magnetotelluric signal,” she says.

In spite of the challenges, the experiment successfully yielded plenty of useful data from both methods that scientists have interpreted together and separately to explore a variety of topics.

When seismologists look for seismic anisotropy in the mantle, they’re searching for seismic waves moving faster in one direction compared to another. As a mantle rock deforms, Long says, it gets sheared from either mantle convection or a tectonic plate moving over it.

“The individual mineral crystals rotate and align themselves depending on the strain direction,” she says. Long compared the aligned mineral crystals to a harbor full of boats with sails unfurled, all oriented in the same direction. One glance, and any sailor can tell which way the wind is blowing. Similarly, by measuring the direction in which seismic waves travel faster, seismologists observe which way the mantle either flowed in the past or is currently flowing.

To differentiate between a currently flowing mantle versus a signal locked in long ago, Long says scientists compare the anisotropy direction with geologic clues at the surface. For example, scientists know which way the tectonic plates currently move relative to one another thanks to GPS, so fast-moving waves parallel to current plate motion indicate actively deforming mantle. On the other hand, if seismic anisotropy parallels ancient geologic features found at the surface, scientists infer that the orientation of mantle minerals formed long ago.

Analysis of MAGIC data by Aragon et al., 2017 found that a sharp change in seismic anisotropy marks the mantle below the Appalachians versus crust to the east, nearer the coast. The fast direction below the Appalachians parallels the range, and may lock in the ancient signature of mountain-building, whereas east of the range, the change in fast direction may reflect rifting when Pangea broke apart.

“If you think about the way the earth is layered, you can think of crust, mantle and core,” says Long. “That’s compositional layering.” By using seismic data from MAGIC along the length of the transect, Long et al. (2019) found significant changes in crustal thickness — between 32 and 58 kilometers. Beneath the Appalachians, the crust ranges from 50 to 55 kilometers deep (Figure 2).

Nestled within these data, they found a gently dipping feature in the middle crust that may preserve an ancient shear zone from the billion-year old collision that helped to build Rodinia. This feature bears similarity to seismic features in the modern-day Himalayan range, which may indicate that they way in which Earth’s crust deforms has remained similar for at least a billion years.

In trying to find the boundary between stiff lithosphere — which typically includes crust and a portion of the upper mantle — and the weak asthenosphere, which is also part of the upper mantle, scientists exploit both the seismic and magnetotellruic data from the MAGIC experiment.

Below the central Appalachians, “the weak convecting asthenosphere… extends much shallower than is typical in continental regions, almost to the base of the crust,” says Long, describing a surprising finding in a place where scientists expected to see thick lithosphere. “Where did the mantle lithosphere go?” she asks.

Because thick mantle lithosphere exists east and west of the region with thin lithosphere, scientists believe something happened to remove that layer. This region of thin lithosphere also coincides with peculiar, young volcanic rocks of Eocene age, roughly 50 million years old. “It’s not at all clear why you would have a volcanic event on a passive continental margin, long after Pangea broke up” says Long, noting that these volcanics do not indicate traditional hotspot volcanism, like Hawaii.

Whatever the cause of the lost lithosphere and coincident volcanism, the MAGIC data will allow seismologists like Long and her colleagues to continue to probe the secrets of this region. “That's the nice thing about these kinds of datasets," says Long. “We record ground motion continuously for several years, and there are a lot of … tricks that seismologists can play to image the earth in different ways.” These types of datasets, she says, “are the gift that keeps on giving.”

Figure 1. Map of the Mid-Atlantic Geophysical Integrative Collaboration, or MAGIC, seismic and magnetotelluric stations. Seismic stations are depicted by red triangles, and magnetotelluric stations as yellow squares. The map indicates topography, as indicated by the color ramp to the right. Thin black lines delineate state boundaries, and dashed lines show major tectonic structures. In particular, the orange dashed line demarcates the Appalachian Front. The white star marks the location of Eocene-aged volcanic rocks, and the black star shows the epicenter of the 2011 Mineral, Virginia earthquake. The inset shows the geographic location of the map. Credit: Long et al., 2020

Figure 2. Cross sectional profile of the preferred two-dimensional electrical conductivity model, as determined from the MAGIC array magnetotelluric data discussed in Evans et al. (2019). Colors indicate resistivity (red is low, blue is high, scale is on the right). The stations are labeled along the top of the profile. Interpretation sketches overlying the electrical conductivity model comes from both magnetotelluric and seismic data. Credit: Long et al., 2020.

Published on May 17th, 2021 Archived Stories