Subduction is the lowest form of flattery

by Alka Tripathy-Lang and Wendy Bohon

Poking above the waters of the southern Pacific Ocean, the Juan Fernández Islands are the youngest volcanoes produced by a mantle plume that punched through the ever-moving Nazca oceanic tectonic plate millions of years ago. Trailing to the east of the Juan Fernández Islands are seamounts—underwater mountains—that get older toward the east. As the Nazca plate moves eastward, it eventually descends beneath the western margin of South America, where the oldest of the Juan Fernández Ridge’s seamounts plunge into the subduction zone. Though the downgoing seamounts are the most degraded of the underwater mountain chain, they are still massive features that can change how the subduction zone operates. In particular, the Nazca tectonic plate changes steepness as it slides below the Andes, becoming curiously flat in places.

The timing and cause of flat slab subduction along the western coast of South America have both been debated, with a focus on two major sections beneath the Andes—the Peruvian and Pampean flat slab subduction zones, north and south, respectively, of the crook in the western South American coastline. Seismologists from German Research Centre for Geosciences (GFZ) in Potsdam, Germany and ETH Zurich, in Switzerland, led by doctoral student Yajian Gao, used seismic data to construct a full waveform inversion—a method that yields a high-resolution image of the seismic speeds of material below the surface of the Earth, published in Geophysical Research Letters. By looking at clusters of faster or slower seismic velocities, they’re able to infer the structure of subducted slabs. In using this analysis to help explore the relationship between subducting slabs and volcanism, they also strove to address whether subduction of the Juan Fernández Ridge caused the Nazca slab to change its downward direction and travel horizontally.

To construct the inversion Gao and colleagues began by focusing on the southern Pampean flat slab subduction zone. They downloaded seismic data, some of which came from the Global Seismographic Network archived at the IRIS DMC, as well as European data stores. They specifically examined 139 earthquakes from the Global Centroid-Moment-Tensor (GCMT) catalog. These earthquakes ranged between magnitude-5.0 and 7.0, and were recorded by 19 seismic networks operating between 1996 and 2019.

To explore how fast seismic waves travel through the subsurface of this part of South America, the velocity structure, Gao and colleagues constructed a synthetic model of the structure in this region, and then simulated the 139 earthquakes. Then, they compared the waveforms produced by this first iteration with actual data from each event. After 53 iterations, they obtained a new seismic velocity model for the crust and upper mantle of the southern Central Andes that reproduced the real earthquake data.

In the Pampean section of the western coast of South America, the Nazca slab slides beneath central Chile and western Argentina. At depths of about 100 and 150 kilometers, the slab extends nearly horizontally beneath the southern Central Andes for between 200 and 300 kilometers.

When a subducting slab flattens, the style of deformation at the surface changes because the slab—rising through the mantle toward the base of the overriding tectonic plate, pushes that hot material aside. The flat slab can scrape off the lowermost layer of the overriding plate, called the continental mantle lithosphere. Horizontal subducting slabs can also change when, where, and how water interacts with the overriding plate, said Frederik Tilmann, Gao’s doctoral advisor. Volcanism typically associated with subduction zones steps inland—sometimes ceasing—because the hot mantle is no longer present.

To the south, the Payenia segment of the subduction zone showcases rather steeply subducting oceanic plate, but indicators from Andean deformation and volcanism at these latitudes tell scientists that between 15 and 5 million years ago, this slab, too, was flat.

In their seismic velocity model, Gao and colleagues found several peculiar regions with either weirdly fast or slow speeds. The faster the seismic waves, the more rigid the material. Slow seismic waves in the mantle, then, suggest comparatively weak rock, like partial melts.

The Pampean flat slab segment contain gaps in seismicity, suggesting that it’s been torn. “Seismicity is possible in the slab because it is much colder than the surrounding mantle,” said Tilmann. “When it is torn, the space in between is filled by warmer less viscous asthenospheric mantle, which is no longer able to sustain earthquakes.” Interestingly, the location of this seismic gap corresponds with the projected location of already-subducted pieces of the Juan Fernández Ridge. 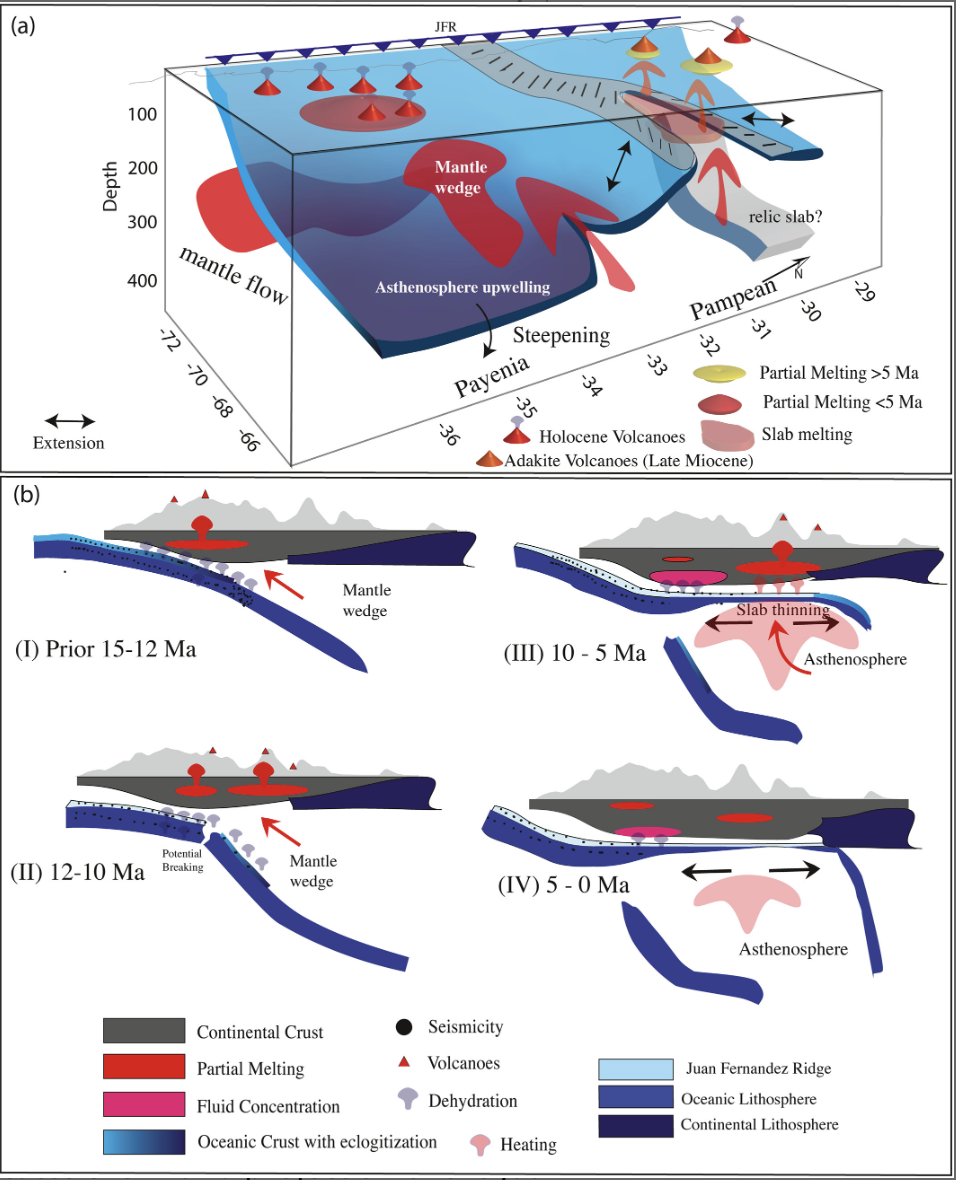 Figure 1. (a) Cartoon representation of the Nazca slab. Gray zone shows the inland projection of the Juan Fernández Ridge as it passed beneath South America. South of 33°S, the Nazca plate subducts steeply. (b) Proposed sequence of Pampean part of the slab that morphed from steep to flat subduction.

Below the flat slab, a curious zone of high seismic velocity indicates something strong. Past studies have suggested that this is an ancient tectonic plate that was completely subducted by late Cretaceous time, but Gao points out that such a slab shouldn’t remain in the upper mantle this long. Instead, it should either sink into the lower mantle or thermally equilibrate—become the same temperature—as the surrounding material. Gao hypothesizes that as bits of the relatively buoyant Juan Fernández Ridge went under, the entire buoyancy of the Nazca slab changed. The older, less buoyant bit may have broken off, with the younger, more buoyant slab—now freed of its dense leading edge—popping up to begin its long-distance flat slab journey. The flat slab would have plowed over this fossil fragment of the Nazca plate.

South of the Pampean flat slab section, the steeply dipping Payenia subduction zone contains its own low-velocity zones both above and below the slab. As this section steepened, mantle flow must have changed, re-opening the region above the subducting slab for hot mantle material. The steepening of this segment would cause melt to form as the downgoing slab loses fluids to the plate above, resulting in renewal of volcanism nearer to the west coast.