When a large chunk of ice at the end of a glacier that flows into the sea breaks off, an iceberg is born. Heralding its birth is often a glacial earthquake that is detected by the Global Seismographic Network (GSN), an array of over 150 seismometers distributed around the world. The iceberg-calving process is a key mechanism by which large volumes of ice are lost from Greenland and Antarctica. Yet, many details remain concealed because permanent cameras are installed at the ends of very few glaciers. Poor visibility, caused by either bad weather or dark winters, further limits the utility of imagery of to understand iceberg calving. Fortunately, scientists can now keep a close eye on this process using seismic data from the Greenland Ice Sheet Monitoring Network (GLISN), which provides continuous coverage of seismicity that is too faint to be detected by global networks.

Using IRIS-curated data from both the GSN and GLISN, scientists Kira Olsen, now at the NASA Goddard Space Flight Center, and Meredith Nettles, of Columbia University’s Lamont-Doherty Earth Observatory, investigated calving at Greenland’s three largest glaciers, which have also produced the majority of recorded glacial earthquakes since 1993—Jakobshavn Isbræ, Helheim Glacier, and Kangerdlugssuaq Glacier. Olsen and Nettles found that GLISN data revealed numerous smaller seismic events in the minutes before, and sometimes after, over a third of the globally detectable quakes. The results of this study were published in the July 2019 issue of the Journal of Geophysical Research-Earth Surface.

According to lead author Olsen, who completed this work as part of her doctoral studies at Columbia University, the focus of the study is on buoyancy-driven calving, which happens when the front end of a glacier sits “too low” in the water and is subsequently bent upward because ice is less dense than liquid water (Figure 1). That bending applies a torque to the ice, causing it to fracture from the bottom up. She says “buoyancy-driven calving then occurs when the fracture has propagated all the way up to the surface and a tall, thin, block of ice has detached.” A vertically perched iceberg is unstable in the water, so it capsizes away from the glacier. As the iceberg accelerates into the water, a glacial earthquake is produced, she says.

Some of the largest icebergs in Greenland form this way, producing earthquakes detectable globally via the GSN. Yet, according to Olsen, “until this point we have had less information on when and where small icebergs calve.” She explains that the GSN stations, located outside of Greenland, are far enough away from the glaciers that they do not detect seismic signals that small icebergs should produce when they form. She says, "The advantage of the GLISN stations is that they are located closer to the large glaciers we study. When we focus on these nearby stations, we can investigate seismic signals from smaller iceberg-calving events.” In other words, before this work, whether calving of small icebergs caused glacial earthquakes was an open question, which led to uncertainty in estimates of total volume of ice lost through iceberg calving. 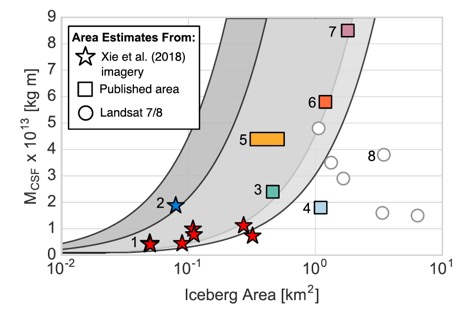 To determine iceberg volumes for a subset of these small glacial earthquakes, Olsen and Nettles looked to published ground-based imagery collected at Jakobshavn Isbræ by Xie et al. (2018). With these data, as well as published area estimates for larger glacial earthquake and calving events, they were able to establish a relationship between iceberg surface area and glacial earthquake magnitude (Figure 2). By assuming a full thickness of 900-1000 meters for small events, they estimate iceberg volumes ranging from 0.04-0.33 km3 .These volumes are substantially smaller than the cubic-kilometer-scale icebergs that cause much larger glacial earthquakes, but cumulatively, can add up to a substantial amount of unaccounted ice loss, potentially 10-30% higher than previously estimated.

Figure 1. Cartoon showing how buoyancy-driven calving occurs. First, the end of the glacier that sits in water begins to bend and break from the base because ice is less dense than water. Second, the fracture fully propagates to the top of the glacier. Third, the tall and thin chunk of ice begins to capsize because the vertical orientation is unstable. As it accelerates away from the glacier, a glacial earthquake is produced. The fourth panel shows the newly formed iceberg on its side, in a stable position in the water. Image credit: Kira Olsen.

Figure 2. Comparison between MCSF, which is a measure of glacial earthquake magnitude, and iceberg surface area. The red stars indicate small seismic events at Jakobshavn Isbræ newly reported in this study. The iceberg areas for these events were estimated from imagery of Xie et al. (2018). Blue star indicates a previously published glacial earthquake with an area estimate from Xie et al. The remaining squares and rectangles show large-magnitude glacial earthquakes detected by the GSN previously, with published iceberg areas from ground-based imagery. The circles show icebergs with less reliable area estimates taken from pairs of Landsat images separated by up to nine days. The circles are not included in the modeled relationship between iceberg area and magnitude. The gray shading indicates values expected from a simple model, as presented in this study, predicting the relationship between iceberg area and seismic magnitude.