Glaciers and ice sheets are constantly on the move, and the processes by which they advance are important for scientists to understand as Earth’s ice becomes increasingly mobile. Researchers at Victoria University of Wellington and Central Washington University recently published a paper in the September issue of Annals of Glaciology focusing on the Haupapa/Tasman Glacier in New Zealand, where they link a type of ice seismicity associated with crevasse growth to rain-induced glacier acceleration. They observe that as heavy rains speed up the glacier and raise its surface elevation upstream, crevasse-sourced seismicity skyrockets shortly thereafter, along with extension. Acceleration and rising surface elevations migrate downstream together, with crevasse-sourced seismicity following behind. From these trends, the authors infer that cavitation, the rapid formation of small cavities filled with air or water, drives crevasse growth. 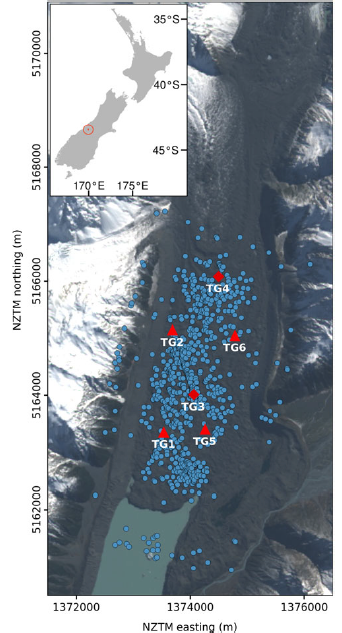 Near-surface cracks propagate downward, forming crevasses. The depth of a crevasse is determined by how stresses interact at the tip. Crevasses channel water into glaciers at variable depths and form a key part of drainage systems that can manage huge quantities of water, says lead author Samuel Taylor-Offord, currently a Science Operations Specialist at GNS Science, formerly of Victoria University at Wellington. However, heavy rain on the temperate glaciers of the Southern Alps of New Zealand can sometimes overwhelm these drainage systems.

When glaciers cannot drain fast enough, excess water floods the base, increasing the basal water pressure. The water lubricates the interface by creating separation between the ice and underlying rock. The increase in water pressure below the glacier decreases the overall effective pressure the glacier exerts on the rock, allowing it to move more freely downstream. Therefore, scientists expect to see glaciers move faster during heavy rains.

To monitor the growth of crevasses, Taylor-Offord says, “we infer that crevasse growth occurs whenever there is a [specific type of] seismic event.” He explains that such ‘icequakes’ produce a seismic signal that is distinct from other sources of seismicity in ice. Icequakes tend to behave like shallow, local earthquakes, producing a weak body wave and a dominant Rayleigh wave.

To study crevasse formation and growth, Taylor-Offord et al. deployed the temporary Tasman Glacier Seismic Network via IRIS PASSCAL, from April 18, 2016 to August 24, 2016 (Figure 1). The purpose of this array was to measure the seismicity released as crevasses formed during periods of heavy rain, as determined from rainfall measurements in a nearby village in the same catchment.

Further, two of the seismic sensors were colocated with high-precision GPS receivers that tracked the acceleration, elevation changes, and strain rate of the ice. Strain rate of a glacier tells scientists whether the ice is compressing or extending. These dual-purpose stations were installed upstream and downstream to monitor the change between higher and lower glacier elevations.

In total, scientists identified 791 icequakes within or near the seismic network (Figure 2).

Icequake rate only increased after heavy rainfall, particularly on May 4. The study focused on this episode, where icequake rate increased by about ten times the baseline during the acceleration phase, and then decreased to below baseline levels for about 3 days before recovering.

Explaining the observations for the May 4 event

Scientists noted several key trends during the May 4 event. First, after several hours of rainfall, the glacier began to accelerate at the upstream station, as expected.

Third, as acceleration initiated, they observed compression of the glacier between the GPS stations. Initially, only the upstream part of the glacier moved forward, pushing against the stationary downstream region. As acceleration slowed upstream and picked up downstream, the ice between the two GPS stations began to extend rapidly. To attribute crevasse formation to extension, scientists would expect to see icequakes increase at the onset of extension; this is indeed recognized by Taylor-Offord et al.

Finally, they relate deceleration and surface elevation decrease to collapsing cavities, and correlate this with lower-than-normal icequake rate. They infer that this is the time required for newly formed or expanded crevasses to accumulate enough stress to grow seismically again.

Cavitation and crevasse formation are linked

Fig. 1. Lower Haupapa/Tasman Glacier and Tasman Glacier Seismic Network (TG) stations (red triangles showing seismic sensors, red diamonds showing collocated seismic sensors and Global Navigation Satellite System receivers) and seismic event locations (blue circles). The location of the study area is shown by a bullseye in the inset map of New Zealand. Events located outside the glacier margins (in the lake or on the mountains) are mislocated, and not considered in the interpretation.

Fig. 2. Cumulative number of icequakes versus time. When the slope changes, the icequake rate, which corresponds to crevasse growth rate, also changes. The first rapid increase in icequakes is on May 4, with an elevated trend lasting for 7 hours before decreasing to rates lower than before the icequake spike. On May 11, another rapid increase in icequakes occurs, with the elevated trend lasting 1.5 hours, followed by yet another decrease to lower-than-normal rates, which lasted 3 days. Modified from Taylor-Offord et al., 2019.