Quaking beneath the ice

The geology of East Antarctica lies hidden below many kilometers of ice, and presents a fascinating and complex problem for geologists. Historically, very few earthquakes have been recorded in Antarctica, which renders it an anomaly when compared to similar stable continental interiors. This apparent lack of seismic activity was thought to be caused by either 1) the entire plate boundary consisting of spreading centers, therefore resulting in relatively little tectonic activity within the plate or 2) the weight of the ice sheets partially suppressing movement on faults. However, data from a new seismic array, AGAP/GAMSEIS, allowed Lough et al. (2018) to detect earthquakes below the ice, and their results directly contradict the notion that Antarctica is seismically and tectonically inactive. 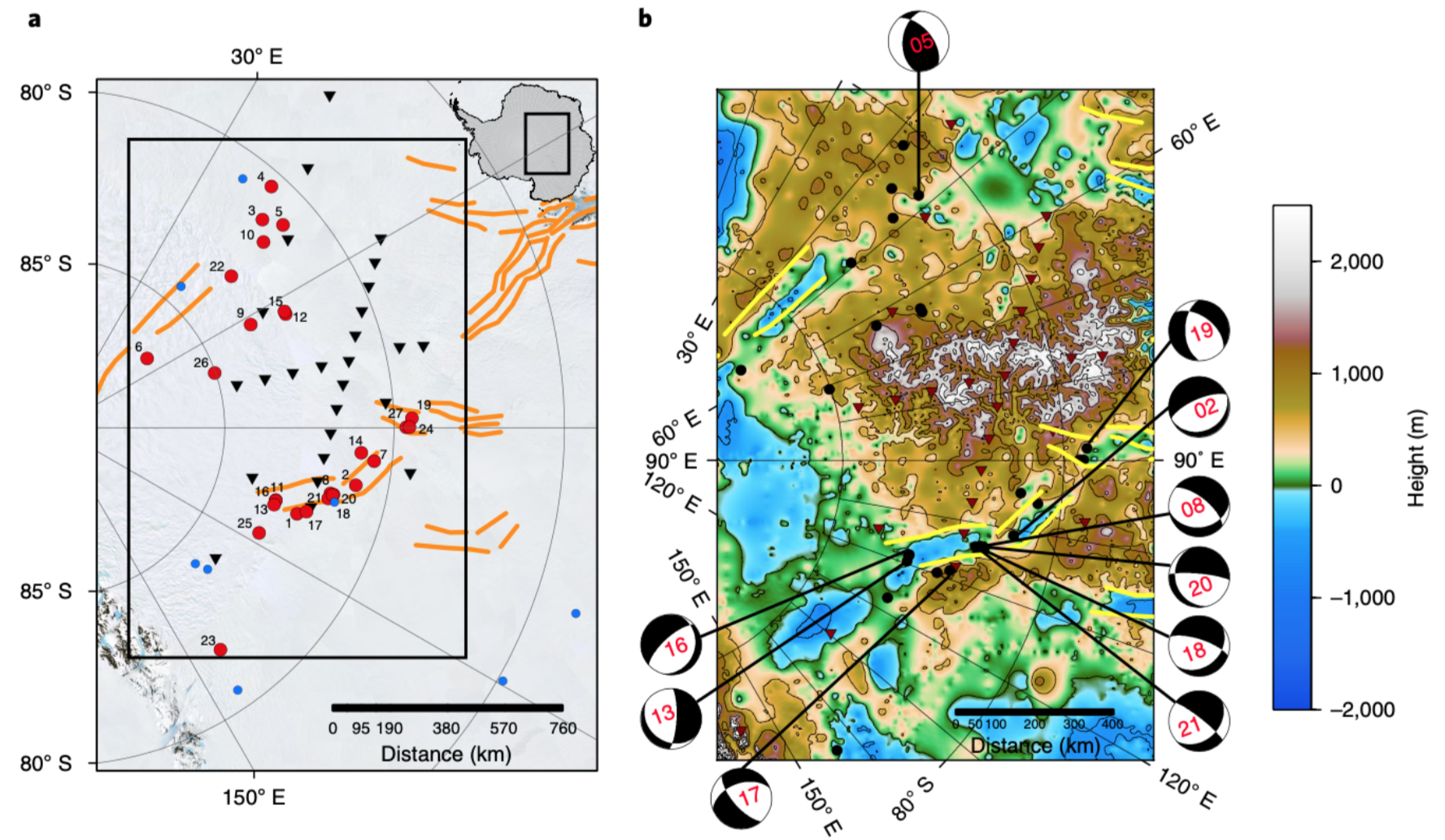 The AGAP/GAMSEIS seismic array consists of IRIS/PASSCAL seismometers installed in the Gamburtsev Province of East Antarctica by IRIS Polar Specialists between 2007-2010. This region is distinctive because the Gamburtsev Subglacial Mountains are completely buried below ice and snow, but radar studies (e.g. Ferraccioli et al. 2011) allow us to peer beneath the ice cover, and show that they are a major mountain range with a rugged landscape comparable to that of the European Alps. In 2009, the AGAP/GAMSEIS sensors detected 27 earthquakes that ranged in local magnitude (ML) between 2.1 and 3.9.

Lough et al. (2018) located these earthquakes at shallow to mid-crustal depths, indicating that they initiated well below the ice. Most occurred beneath sedimentary basins adjacent to and aligned with the Gamburtsev Subglacial Mountains. Because these events are mostly extensional, are too small to be attributed to active rifting, and are located along a series of linear valleys (Figure 1), they are thought to result from reactivation of the ancient (>100 Ma) failed East Antarctic Rift System. Also, these new earthquakes demonstrate that Antarctica is significantly more active than previously thought, with seismicity levels comparable to other plate interiors like the Canadian Shield. These results require that scientists rethink the relationship between ice sheets, the stresses they exert within a tectonic plate, and seismic activity.

Figure 1. Maps of earthquakes and seismic station locations. a. Earthquakes (red circles) and station locations (black triangles) plotted over the Mosaic of Antarctica satellite image. Teleseismically recorded earthquakes are shown by blue circles.The large black box outlines the location of Figure 1band the inset in the upper right shows the map with respect to Antarctica. b. Earthquake and station locations plotted over BedMap2 bed topography. Earthquakes are indicated by black circles and seismic stations by red inverted triangles. The best-constrained focal mechanisms (beach ball diagrams) are plotted with lines drawn to the event locations. Orange (a) or yellow (b) lines outline proposed ‘rifts’.

For more information about AGAP

For more information about GAMSEIS

For information about the Mosaic of Antarctica satellite image

For information about the BedMap2 Bed Topography of Antarctica

For information about radar studies of the Gaburtsev Mountains, see: