Injection induced earthquakes are considered to be “man made.” These earthquakes are largely the result of two different injection processes – wastewater injection and hydraulic fracturing – both of which are tied to the oil and gas industry in the eyes of the general public. However, wastewater injection sites facilitate the disposal of a variety of different fluids that span the range of possible hazards – from nonhazardous municipal waste to highly hazardous industrial waste – by simply injecting it into the earth. That said, the vast majority of wastewater injection sites in the United States aid in the disposal of fluid generated by oil and gas extraction at nearly every oil well by injecting this waste into the deep subsurface. Hydraulic fracturing, on the other hand, is a very specific injection process whereby fissures in bedrock at depth are forced open by water, sand and chemicals injected at high pressure. Both types of injection processes have been reported to cause headline-worthy earthquakes in places with records of low levels of seismicity, such as Oklahoma. In these instances, the unsuspecting local population can feel these earthquakes, which surprises and often scares those who may have never felt one before. 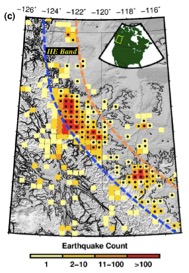 To answer this question, researchers led by Dr. Honn Kao at the Geological Survey of Canada used geodetic information and seismic data from a variety of sources, including the IRIS DMC, to examine the regional strain field across areas in Western Canada that do and do not experience induced earthquakes (Figure 1).  Kao et al. (2018) found that the tectonic strain field is among the most important factors that control whether an area would experience induced earthquakes.

To understand this result, we begin by defining the tectonic strain field. Strain is simply the amount of deformation over a certain distance. When looking at a strain field, we want to understand how the strain varies within a specific area – in this case, Western Canada. The tectonic strain field refers to a specific component of strain – that which can be attributed to large-scale tectonic forces. By Kao et al. comparing the strain field to the locations of injection-induced earthquakes, they discover a striking correlation (Figure 2). Most induced earthquakes are in a 150-km-wide swath whose northeastern boundary (orange dashed line in Figures 1 and 2) is defined by the lack of regional seismicity beyond it. Where the strain rates are low, such earthquakes are much less frequent.

One way to think about whether this model is reasonable is to look at places that are known to have extensive high-volume injections that also lack any significant increase of induced earthquakes. Kao et al. point to studies in Saskatchewan, North Dakota and Pennsylvania that show this behavior, and note that the tectonic strain rates in these regions are quite low. Thus, in spite of extensive injection operations in these regions, seismicity has remained low, and may be explained by the low tectonic strain rates. 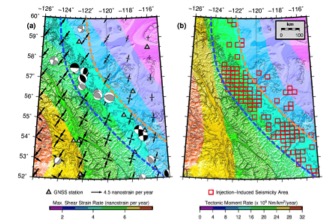 Interestingly, a corollary of this finding is that whereas widespread wastewater injections appear to increase seismic hazard in the short term, it is possible that the natural earthquake occurrence could be reduced at longer time-scales. However, this would require that such earthquakes continue for an extensive period of time, and over a large spatial area. Thus, the likelihood of altering the overall regional seismic hazard is low. Regardless, understanding the factors controlling induced seismicity will help scientists and energy companies to make informed choices about future non-conventional hydrocarbon extraction and wastewater disposal locations to limit the amount of induced seismicity.

Figure 1. Map showing distribution of earthquakes and injection operations in northeastern British Columbia and western Alberta, Canada (see inset), from January 2014-Deccember 2016. Each 20-by-20-km area square is color-coded by the number of earthquakes. Areas where local seismicity and injections are co-located are marked by a solid dot at the center of the cell.  The orange dashed line delineates the northeastern limit of regional seismicity, and the blue dashed line marks the approximate southwestern limit of injection wells. The “IIE band” indicates the 150-km band of injection-induced earthquakes.

Figure 2. Maps showing seismic and geodetic observations. (a) Regional strain field determined from Global Navigational Satellite System (GNSS) measurements. The arrows at each grid point show the observed strain rates and directions. The background color corresponds to the maximum shear strain rate. Earthquakes that occurred before and during the study are shown in gray and black colors, respectively. Dashed lines show the area with injection-induced earthquakes (b) Tectonic moment rate estimated from strain rate and the thickness of seismogenic layer. Squares with red outlines show 20-by-20-km areas that have both seismicity and injection.