Beneath the surface of the ocean, the topography of the seafloor is constantly shaped by the ceaseless movement of water. Earth contributes to the never-ending renovations, particularly when sections of continental slope abruptly fail. Called submarine landslides, they can move millions of tons of sediment and rock hundreds of kilometers in one fell swoop. Such massive redistributions of sediment can displace the water column, triggering devastating tsunamis in the same way megathrust earthquakes do. They can also damage offshore oil and gas infrastructure, like platforms and pipelines, and they could wrest submarine cables from underwater moorings, disrupting transcontinental communication. 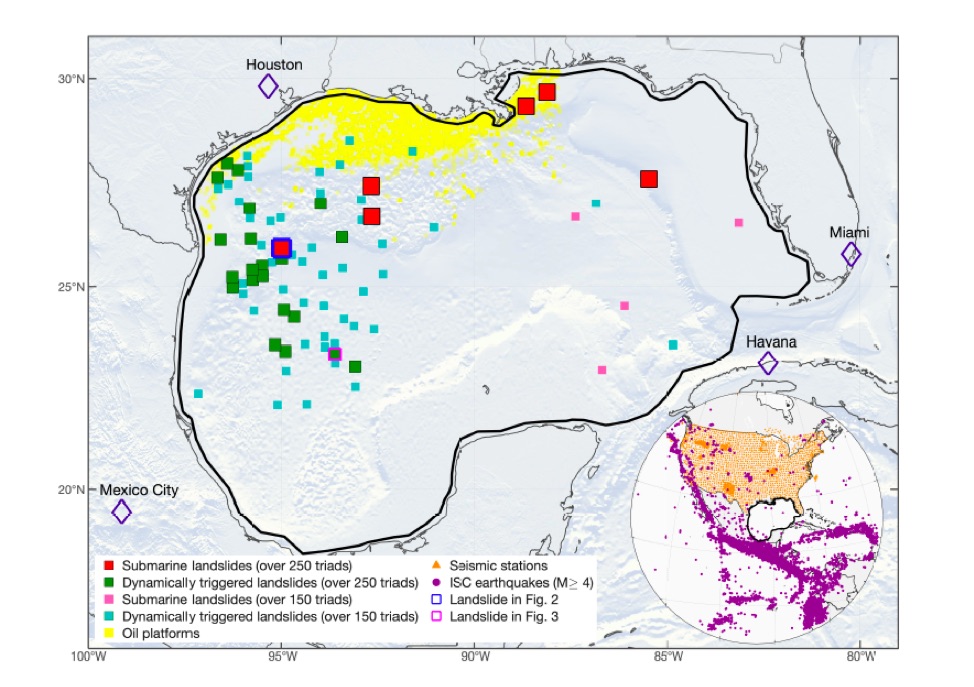 Massive submarine landslides are often shaken loose if a large earthquake strikes nearby. However, triggers for smaller landslides are poorly understood. In a paper published recently in Geophysical Research Letters, Wenyuan Fan, a seismologist at Florida State University, and his colleagues, discovered 85 previously unknown submarine landslides in the Gulf of Mexico by analyzing 8 years of seismic data and extracting characteristic seismic signals of continental slope careening downhill. They correlated 75 of the 85 landslides with surface waves from distant, moderately-sized earthquakes, and concluded that these distant temblors triggered landslides.

By their very nature, submarine landslides of all sizes are difficult to observe. Large landslides show themselves via tidal gauges tasked with monitoring the seas for tsunamis, but smaller landslides don’t usually cause the water column to slosh about. Scientists must find other ways to accurately detect and locate these seafloor remodels.

Fan and his colleagues examined seismic data from 2008-2015, primarily from the USArray Transportable Array. Using a method that detects seismic waves in the 20- to 50-second period band that travel exclusively at the surface of the earth, they identified 85 seismic sources along tectonically inactive swaths of the Gulf of Mexico (Figure 1). Automated algorithms are tuned to pick up more obvious seismic signals, as opposed to these subtle surface waves that rippled across North America, barely noticeable above the cacophony of Earth's constant long-period vibrations.

To ensure these events weren’t earthquakes, Fan says, "we carefully examined the seismicity in the Gulf of Mexico.” In particular, he says, “for an earthquake to generate a continental scale seismic wavefield, the event needs to have a magnitude of at least 3.5.” In other words, if these were earthquakes, they would have been big enough that agencies like the U.S. Geological Survey (USGS) would have noticed. Further, Fan says that the seismic energy radiates very differently than in an earthquake, and is better replicated by models assuming a mass sliding down a hill versus crust breaking along a fault.

These events are also not stormquakes—surface waves caused via the pounding of the sea on the ocean floor during hurricanes—simply because they do not correlate with major storms. “Overall, our observations can be best explained by submarine landslides,” says Fan. 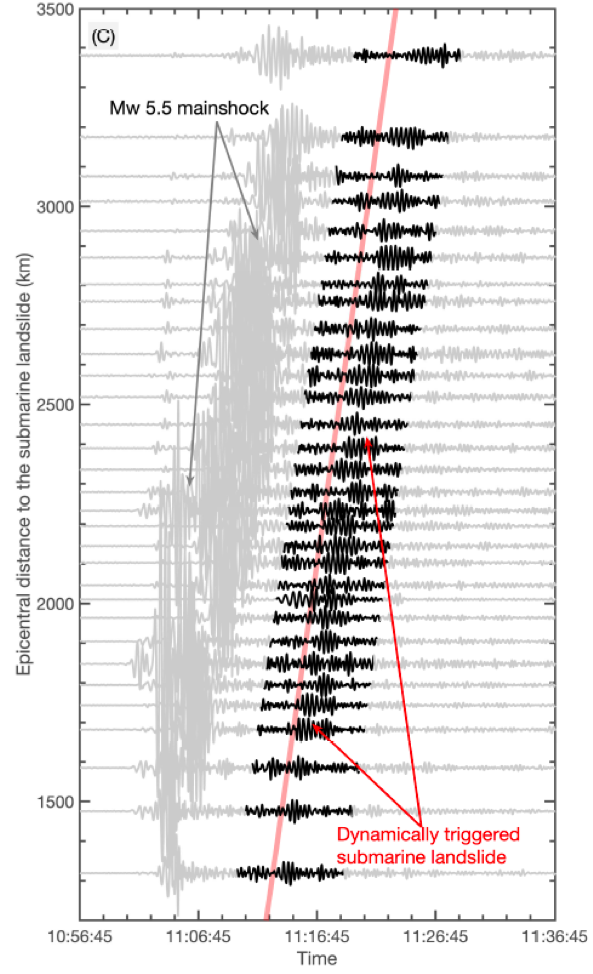 Of the 85 detected landslides, Fan and his colleagues noticed that 75 occurred either during or immediately after surface waves from distant earthquakes passed through. Because the waves from these quakes correlated with landslides in both space and time, coupled with the lack of background seismicity in the Gulf of Mexico, Fan says, “the landslides were likely dynamically triggered by the earthquakes.”

These two sets of surface waves—one from the triggering earthquake, and the other from the landslide—are consistently separated from one another in the seismograms (Figure 2). This makes them easily identifiable to scientists like Fan.

Interestingly, very large events, such as the 2011 magnitude-9.0 Tohoku earthquake, or the 2012 magnitude-8.6 and -8.2 Indian Ocean earthquakes, did not trigger any obvious submarine landslides. Fan and colleagues posit that perhaps seismic waves from such immense earthquakes may have masked those produced by landslides. Alternatively, Fan says “the wave characteristics of these large earthquakes [may be] too different than the triggering earthquakes.”

Submarine landslides appear clumped together in the northwestern corner of the Gulf of Mexico, which corresponds to the coastal waters of Texas. Famous for its oil production, much of this region is slated for future offshore drilling. Because this area is prone to landslides, Fan says, “I hope our study can help inform the planning efforts and communities along the Gulf coast to reduce the foreseeable risks.” He continues, “No one wants another BP oil spill in the Gulf, and this is actionable science given [that the region] is prone to submarine landslides.”

Figure 1. Shaded topographic map showing submarine landslides in the Gulf of Mexico (2008-2015), as identified by analysis of surface waves produced by seismic sources located in the Gulf. Offshore oil platforms are identified in yellow. The inset shows earthquakes reported by the International Seismological Centre with magnitudes greater than 4.0 from 2006-2015, and seismic stations in the US, which largely comprise USArray Transportable Array stations. Notice very few earthquakes nucleated in the Gulf of Mexico. From Fan et al. (2020).

Figure 2. In this example of a submarine landslide dynamically triggered by an earthquake, the waveforms from each event align from randomly selected seismic stations that cover a wide range of distances away from the epicenter of the triggering earthquake. The grey signals are the waves from the triggering temblor, and the black signals are the surface waves produced by the landslide. From Fan et al. (2020).

Cover photo:  Northern Gulf of Mexico deepwater bathymetry grid created from 3D seismic surveys. The grid defines water depth with 1.4 billion 40-by-40 ft cells and is available in feet and meters. BOEM grid coverage is the area defined by the color in this image. Shaded relief is vertically exaggerated by a factor of five.

Published on May 18th, 2020 Archived Stories