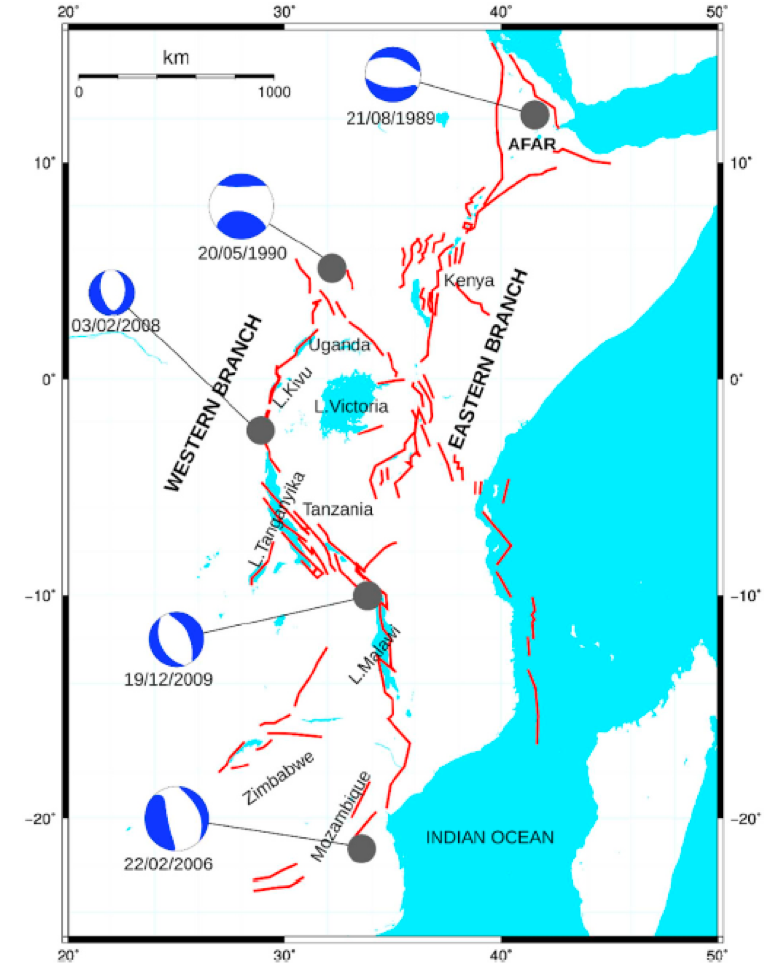 The East African rift zone does not conjure visions of catastrophic earthquakes like the plate boundaries encircling the Pacific Ocean. Instead, its most famous section—the Afar region of Ethiopia—evokes images of fossilized remains of early human ancestors. Yet, as the African continent tears along this 3000 to 4000 kilometer-long set of structures, damaging earthquakes can strike in places that may seem surprising to some.

The East African rift zone snakes its way much further southwest beyond Ethiopia, through Kenya, Uganda, Tanzania, Malawi, Zimbabwe, and finally, Mozambique (Figure 1) , which perches atop South Africa. The tectonically active central Mozambique area experienced several damaging earthquakes in the last few decades, including a magnitude 7.0 quake in 2006 and several events ranging from magnitude 5.6 to 5.8 during the past five years.

One of these moderate quakes—a magnitude 5.6 event— struck central Mozambique on December 22, 2018, near the Zimbabwe border. People reported feeling the earthquake from more than 500 kilometers away. Several international organizations used data collected from teleseismic stations—those located greater than 1000 kilometers from the source of the earthquake—to rapidly determine the location, magnitude and sense of motion of the rupture. Unfortunately, Mozambique’s non-functional seismic stations provided no local data, which would have helped clarify the earthquake’s characteristics.

However, regional seismic networks in Botswana and South Africa, coupled with seismic data from Zimbabwe, Namibia, Zambia and Malawi, aided Blessing Shumba, a seismologist at the International Seismological Centre in the United Kingdom, in refining the location and orientation of the ruptured fault plane. In this work, recently published in the Journal of African Earth Sciences, he and his coauthors also examined responses from a survey conducted in the immediate aftermath of the earthquake that focused on people living near the epicenter, which is the point on Earth’s surface directly above the fault rupture at depth. They discovered that the intensity of shaking experienced by villagers near the epicenter seems high, considering the moderate magnitude of the temblor. 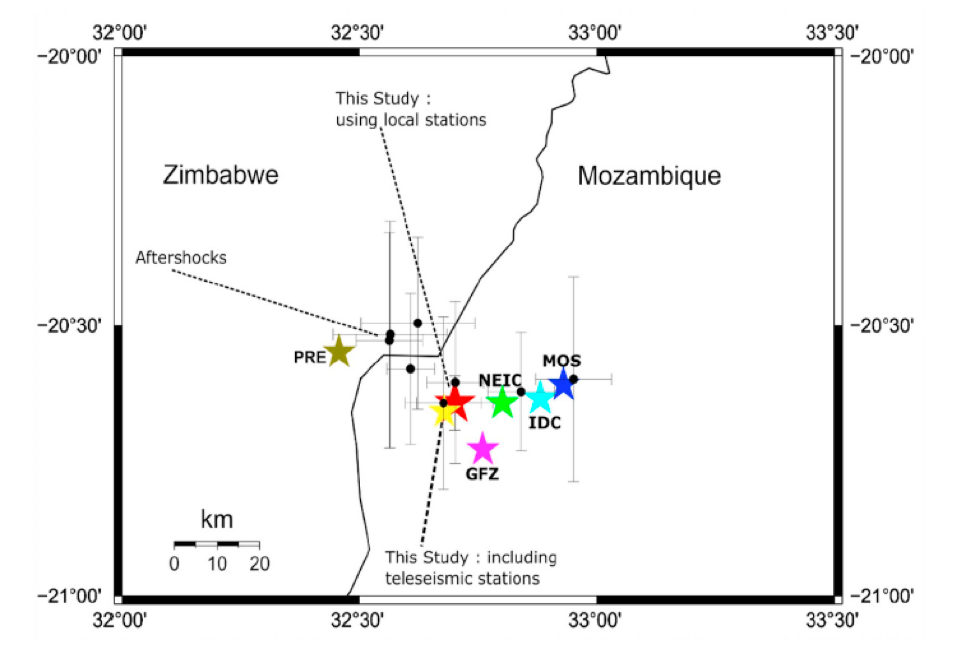 Shumba added teleseismic data from the IRIS DMC to his analysis of regional stations for a total of 175 seismometers (Figure 3). This improvement in coverage only slightly moved the epicenter, but resolved the depth to 21.2 kilometers below the surface, consistent with other depth estimates of this earthquake and other events along the East African rift.

The East African rift system’s tortuous path from Ethiopia to Mozambique largely follows the continent’s geological boundaries, where old, thick pieces of continental crust called cratons form barriers that deflect faults into younger, less resistant crust. The southernmost rift-related faults in central Mozambique drop blocks of Earth downward as structures called “graben”—German for ditch. The southern end of the rift zone, the Urema Graben, trends to the north-northeast, and appears to end at the incipient north-trending Mazenga Graben (Figure 4). This change in orientation follows the outline of cratons, with the faults largely confined to the comparatively weaker crust under the Mozambique coastal plains.

As part of Shumba and his coauthor’s comprehensive analysis, they confirmed that during the 2018 earthquake, one side of the fault moved mostly down and away from the other. Called “normal faulting,” this type of motion matches the expected movement of a rift zone. The quake ruptured a plane oriented NNE-SSW[8] , consistent with other earthquakes that have occurred along the Urema Graben. However, this region lacks dense earthquake monitoring networks, hindering a comprehensive picture of how these structures move and break. 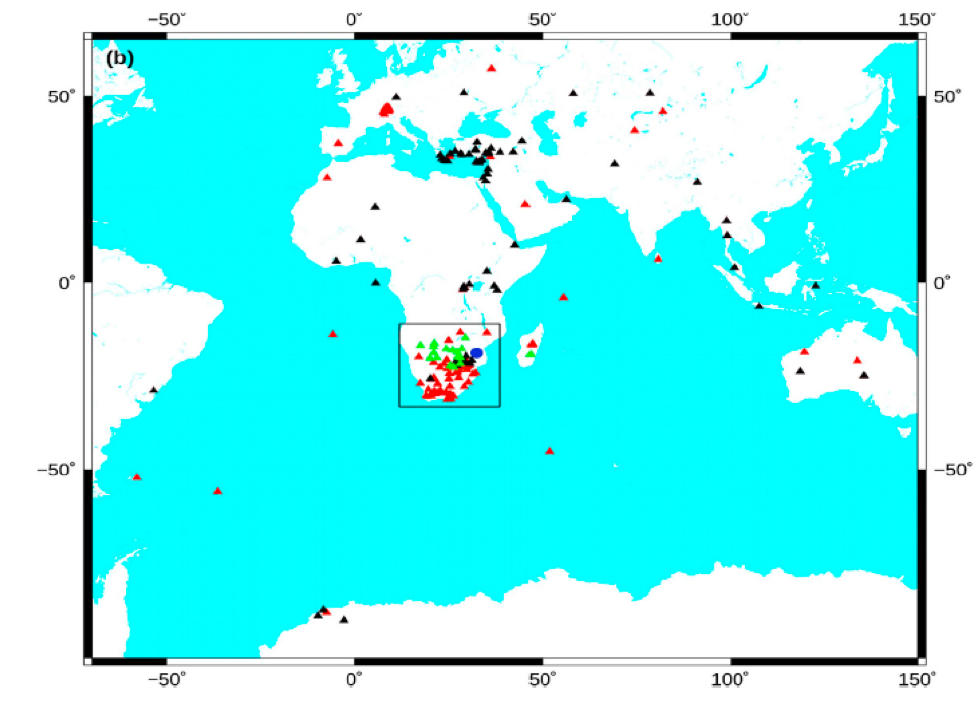 Immediately after the 2018 earthquake, the Goetz Observatory in Zimbabwe launched a survey to assess shaking intensity via telephone, Facebook, and Twitter. In total, the 215 responses spanned Mozambique, Zimbabwe, Botswana and South Africa. In Mozambique, the nearest villages to the epicenter lack internet, hampering data collection through social media, whereas in Zimbabwe, several towns near the epicenter have internet access. To round out the survey results, Shumba and colleagues included news and television reports, government on-site inspections, and any relevant social media posts they could find.

Using this information, they pieced together shaking intensities based on the Modified Mercalli Intensity, or MMI, scale. They found MMI intensities of VII-VIII—very strong to severe shaking—nearest the epicenter. This level of shaking rendered some homes uninhabitable, with 108 buildings destroyed in Mozambique and 40 buildings affected in Zimbabwe. The characteristic baked-brick architecture in this region is not designed to withstand such jolts.

Why did a moderate earthquake produce such strong shaking? Part of the answer may lie in the East African rift’s tendency to traverse sedimentary rocks and unconsolidated sands and soils, as opposed to cratons. Weaker substrates tend to amplify seismic waves, and the larger the wave’s amplitude, the worse the shaking. Coupled with buildings not designed for seismic hazards, such earthquakes at relatively shallow depths can devastate local populations. By scouring the available information across the region, Shumba and his colleagues’ work can assist in earthquake planning and future hazard mitigation. 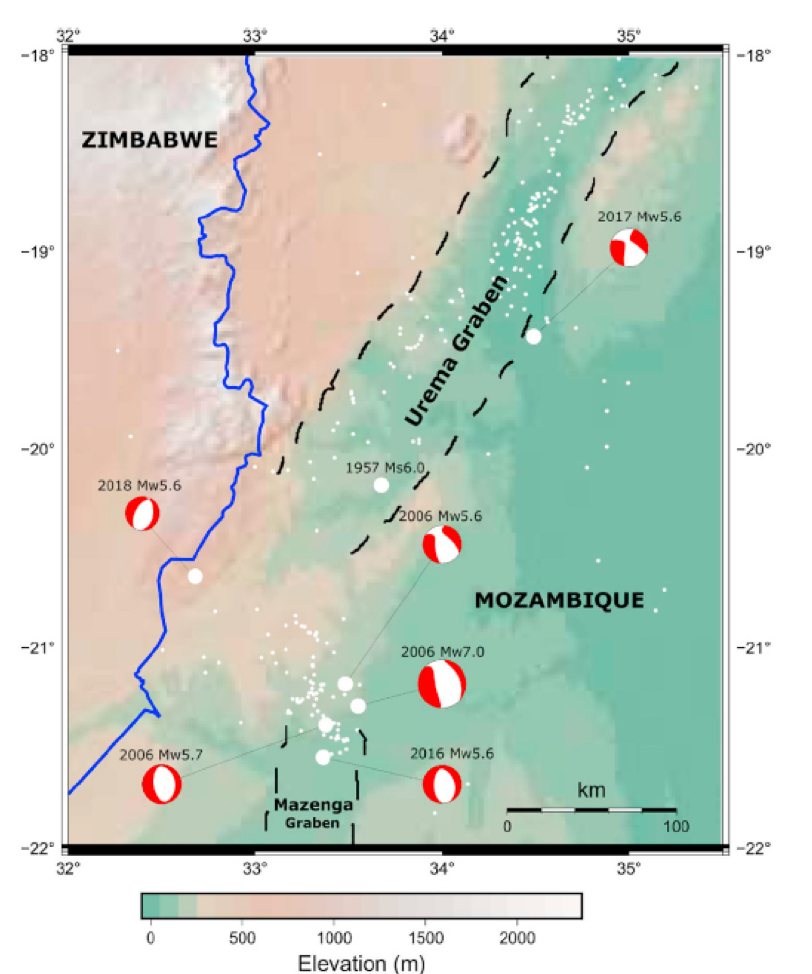 Figure 1. The East African Rift System, shown in red, lurches southward from the Afar region of Ethiopia to Mozambique. The gray circles with show locations of major earthquakes, along with beachball diagrams that tell seismologists how the fault moved in each event. Credit: Shumba et al., 2020.

Figure 2. Stars show the variation in epicenters calculated by different organizations. The red and yellow stars show the epicenters calculated by Shumba et al. with and without teleseismic data. The black dots show aftershocks sifted from the regional seismic data, with error bars represented uncertainty in latitude and longitude. Credit: Shumba et al., 2020.