A brief history of the very first broadband seismic station 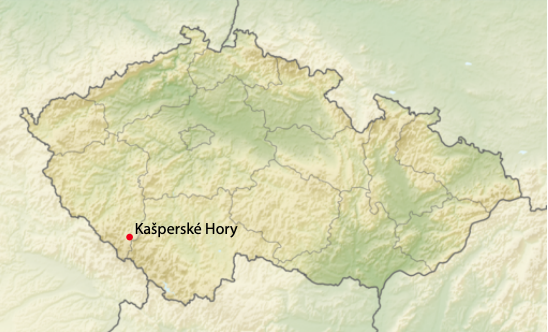 In the Šumava Mountains of the South Bohemian region of the Czech Republic, the town of Kašperské Hory nestles in the dense forest (Figure 1). During medieval times, the settlement flourished, with prolific gold mines tucked into the mountains. Eventually, gold extraction decreased, as did Kašperské Hory’s prominence. By the 18th century, industries like glassmaking and lumber had replaced mining, and the town gradually became a small social center of a few thousand mostly German inhabitants.

In the years before World War II, Germany annexed parts of the country of Czechoslovakia, including this mountain region, which resulted in expulsion of non-German inhabitants. After the war, Kašperské Hory was returned to Czechoslovakia, and the German population was in turn expelled and replaced by Czech citizens.

With the onset of the Cold War, Kašperské Hory sat near the border separating a politically divided Europe. A military “no-go” zone was established to separate Western Europe from Eastern Bloc countries that were controlled by the communist Soviet government, like Czechoslovakia. Because Kašperské Hory resided near this zone, the newly installed Czech inhabitants were resettled elsewhere and the the military moved in.

The Cold War marked the proliferation of nuclear weapons and testing, with both sides monitoring detonation of nuclear devices via seismology—one of the only ways to reliably identify underground nuclear explosions across the globe.The U.S. and its allies established a network of seismometers around the world in part to keep tabs on Soviet nuclear capabilities, while the Soviet government needed a seismic station located as west as possible to help track U.S. bomb tests. Quiet Kašperské Hory, devoid of the cultural seismic noise that people produce as they go about their day (with the exception of military activity), proved to be an ideal location for both nuclear surveillance, and for germinating new ideas, as described by Petr Kolář in a recent paper published in Seismological Research Letters. Kašperské Hory's seismic station, known as station KHC, became the birthplace for broadband seismology.

Today, we may take for granted that seismic stations—particularly those in the Global Seismographic Network —have sensors that detect frequencies ranging from high-frequency ground motions produced by nearby earthquakes to very slow oscillations of the entire globe. This requires bandwidths ranging from hundreds of Hertz to periods of 80,000 seconds, according to a recent paper published by U.S. Geological Survey scientists Adam Ringler and Patrick Bastien. 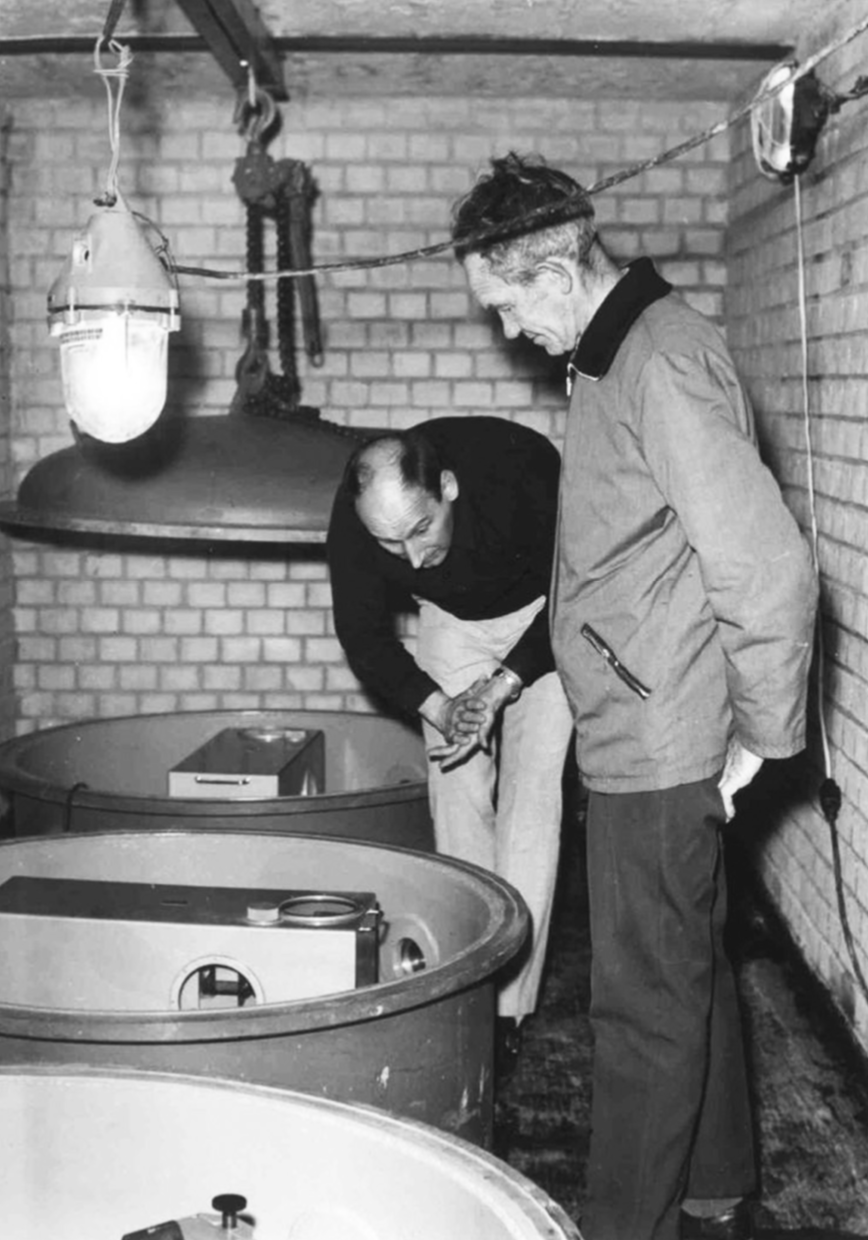 However, in the early 20th century, seismic measurements were made mostly by mechanical instruments consisting of a heavy, nearly stationary pendulum with a stylus attached to the bottom, enclosed in a frame. When an earthquake struck, the pendulum stayed motionless as the frame and recording mechanism (like a piece of paper) moved. Imagine holding a pencil in your right hand with the tip touching a piece of paper on the table. Then, move the paper back and forth with your left hand, without moving the pencil. The scribbles left behind record the motion of your left hand, similar to a seismograph recording the horizontal component of Earth's motion.

Electromagnetic seismometers improved many facets of seismology, replacing the early, giant mechanical instruments. But, the avant-garde instrumentation could only record over a narrow frequency range.

In 1960, in the newly established Kašperské Hory seismic station which was hidden deep within the tunnels of an abandoned gold mine, scientists installed these narrow-frequency instruments along with photo development rooms, precisely synchronized clocks, and staff offices. On January 1, 1961, station KHC officially began recording seismic data via a 3-component short period seismometer—one vertical and two horizontal, according to Kolář (Figure 2).

Over time, the station became known for both careful processing by the scientists and for the low-level noise.

Station KHC, like most stations at the time, specifically listened for weak seismic signals produced by far off earth-shaking explosions, but it was hampered by the narrow frequency it was able to record. Seismologist Axel Plešinger, among others, became interested in extending the range of recorded frequencies and begin to experiment.

Plešinger began development of a new system in 1967, relying on negative electronic feedback loops to increase the dynamic range of this fledgling instrument. To explain such feedback loops, Ringler explains, “instead of recording the displacement of the mass relative to the frame, the instrument records the voltage that is required to keep the mass stationary by putting a force on the mass that is proportional to [any ground motion], but with a negative sign.” In other words, the feedback loop tries to keep the mass stationary, and the force required to do so corresponds to how much the ground moves (Figure 3).  “By moving from a mechanical system to an electrical system, you can greatly change the dynamic range [of a seismometer], says Ringler.

In 1972, Plešinger began installation of what would be known as the world’s first Very Broadband (VBB) seismometer, which included development of a new recording device and signal processing. In the end, this new instrument had a response flat to ground velocity from 0.3 to 300 seconds period, thanks to the electronic feedback loop. But what does “flat to ground velocity” mean?

“A seismometer takes an input from ground motion [like velocity] and outputs a voltage,” says Ringler. The sensitivity of a seismometer lets scientists convert the measured voltage back to velocity for further analysis. However, he says, “this relationship only holds in the “flat" portion of the seismometer.” At frequencies greater or less than those within the flat portion, the voltage gets attenuated, and "you have to correct for this,” he explains (Figure 4).

Thus, seismologists operating Plešinger’s original VBB seismometer could convert periods ranging from 0.3 to 300 seconds (or frequencies of approximately 3 to 0.0033 Hertz) to velocity with little difficulty, says Kolář. Moreover, beyond that range, the the VBB seismometer was more sensitive to acceleration, says Kolář, which extended station KHC’s ability to monitor seismic waves from the short wavelengths of earthquakes and explosions to the long wavelengths of the free oscillations of Earth, and everything in between.

Because of a shortage of electrical components in communist countries, station KHC remained the only VBB station within the Soviet sphere of influence for many years. Soon after Plešinger installed the VBB seismometer—his “most noteworthy accomplishment” among many career highlights according to Kolář—the concepts of VBB seismology diffused westward, outside the Eastern Bloc countries. In Switzerland, Erhard Wielandt improved the mechanical construction of the instrument. These modifications are still in use today by Streckeisen, a company that manufactures seismometers used widely by the scientific community. In the U.S. Joe Steim added digital recording equipment and extended the feedback system to be flat to velocity to a period of 360 seconds. “It can be said that all VBB systems are built on three stilts: Czech ideas, Swiss mechanical precision, and American computer know-how,” said Kolář in his paper.

Ringler concurs, saying “The work horse seismometer of the Global Seismographic Network makes use of the principals and ideas developed in the first broadband seismometer in Kašperské Hory.”

The military mission in Kašperské Hory ended as of April 14, 1982, says Kolář, referencing a document in the archives of the Institute of Geophysics of the Czech Academy of Sciences.

Today, Kašperské Hory is part of the Czech Republic, near the German border. It's much less lonely, with the town welcoming tourists who wish to experience both beautiful hiking trails and the rich history of the region. In spite of the increased noise—seismically speaking—stemming from the small population moving about, the background levels are still comparatively low. Station KHC continues to operate with fully modernized digital equipment, but instead of serving as a strategic station to monitor for nuclear weapons, it is one of many stations that dot the landscape of central Europe, listening more for earthquakes than explosions.

Next to the mine entrance that still contains station KHC, The Museum of Seismometry, formerly part of the station itself, houses the historical seismometers for all to see (Figure 5). The unique seismograms recorded by Plešinger’s VBB seismometer, which operated from 1973 to 1986, have been digitized to avoid loss. They are available at the IRIS Data Management Center.

Figure 1: Relief map of the Czech Republic, with location of Kasperke Hory near the German border. Credit: Modified from Wikipedia

Figure 2: Axel Plešinger, left, standing beside the sensors at station KHC. These sensors were installed at the end of a mine tunnel in special dishes with a large, heavy dish cover on top. The dishes are open for maintenance in this undated photograph. To lift these heavy covers, a derrick is required (see the cover hanging above farthest dish). Credit: archive of the Seismological Department, Institute of Geophysics of the Czech Academy of Sciences

Figure 3: Diagram of a feedback loop used in modern-day seismometers. As the ground moves because of ground motion, the mass also moves. This displacement is successively recorded by a displacement transducer and then as velocity (remember, velocity is the derivative of displacement). The differentiated signal goes through a circuit with a resistor and capacitor before getting fed back into the mass through the force transducer. The goal of the system is to keep the mass from moving. Credit: Ringler and Bastien, 2020.

Figure 4: Response of two sensors as a function of frequency. The blue curve is flat to velocity to 120 second period, meaning that at 120 seconds, scientists cannot simply convert the measured voltage to velocity. Credit: Ringler and Bastien, 2020

Figure 5: Photograph of the entrance to the Kristyna mine, in which the sensors for station KHC still reside (left) and the former seismic station building that has been converted to a Museum of Seismometry (right). Credit: P. Kolář