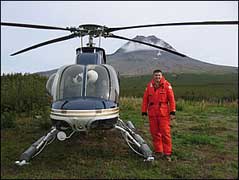 The Division of Earth Sciences at the National Science Foundation is pleased to announce the appointment of Dr. Gregory Anderson as the EarthScope Program Director. Dr. Anderson will also be responsible for managing NSF's support of the Southern California Earthquake Center (SCEC). He is replacing Dr. Kaye Shedlock who successfully led the EarthScope program through its design and construction phase, and retired from NSF at the beginning of January.

Dr. Anderson is currently a Senior Scientist at the Swiss Seismological Service (SED) at ETH in Zurich, where he is program manager for the Global Earthquake Model (GEM) project,  a worldwide seismic hazard and risk modeling effort, as well as head of the SED Information Technology Group. He has an A.B. in Geophysics from the University of California, Berkeley and a Ph.D. in Earth Sciences from the University of California, San Diego. Dr. Anderson had postdoctoral fellowships with the U.S. Geological Survey and the Southern California Earthquake Center and was the Data Products Manager for EarthScope's Plate Boundary Observatory (PBO) from 2003-2007.

Dr. Anderson is expected to take up his new position at NSF in April 2009.