In recognition of the 50th anniversary of the magnitude 9.2 Great Alaska Earthquake of March 27, 1964, IRIS offers a set of three animations made in collaboration with the U.S. Geological Survey and the Alaska Earthquake Center. Although the animations share some elements in common, they each offer a unique story.

1) The 1964 Great Alaska Earthquake. Description of the magnitude 9.2 megathrust earthquake, second largest earthquake ever recorded by modern instruments. The animation explains the magnitude (just how big is 9.2?), rupture processes, elastic rebound, and resulting tsunami. Data from this earthquake confirmed important aspects of the then-new theory of plate tectonics. 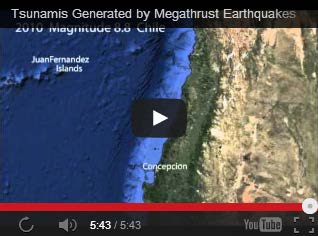 2) Tsunamis Generated by Megathrust Earthquakes. An animation about tsunami-generating megathrust earthquakes uses examples from Japan, Chile, and Alaska to describe structures that generate deadly tsunamis including: megathrust plate-boundary displacement; deformation of the overriding plate by splay faulting and/or folding; and earthquake-generated landslides.

3) Tectonics & Earthquakes of Alaska—More than just plate boundaries. Describes earthquakes of the Aleutian subduction zone boundary, one of the most seismically active in the world, and the Queen Charlotte Transform Fault. Explains how Yakutat terrane accretion drives mountain building and crustal fault earthquakes like the 2002 M7.9 Denali earthquake.