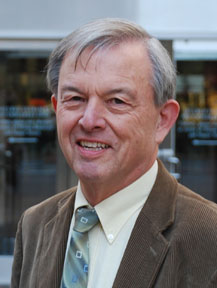 David Simpson was selected by the American Geophysical Union (AGU) to receive its prestigious Waldo E. Smith Medal in recognition of his extraordinary service to the geophysical sciences. With his leadership and vision, his commitment to operating and strengthening seismological facilities, and his dedication to the education of students, David epitomizes the criteria for the Smith Medal. He will receive the Smith Medal at an awards ceremony on Wednesday, December 5, 2012, during the AGU Fall Meeting in San Francisco.

As President of the Incorporated Research Institutions for Seismology (IRIS), David's leadership, guidance, vision and management have markedly transformed the way seismology research is conducted. He is an ardent advocate of open access to high quality seismic data and the availability of portable instrumentation for field deployments around the world. He played a leading role in the development of the EarthScope proposal, the largest project in the solid Earth sciences ever undertaken by the US, and has worked with many countries to establish their own geophysical observatories. In addition, David recognized the value of cultivating the next generation of Earth scientists and helping make the public aware of exciting discoveries in seismology and the Earth sciences. He championed the establishment of a program within IRIS to develop educational and outreach materials and encouraged the development of a forum for early career seismologists to share experiences with their peers. Because of his leadership skills and forward-looking ideas, the IRIS Consortium is regarded by many as a premier model for the management and operation of a community-governed, multi-user facility.

The Smith Medal honors individuals who have played unique leadership roles in such diverse areas as scientific associations, education, legislation, research, public understanding of science, management, and philanthropy, and whose accomplishments have greatly strengthened and helped advance the geophysical sciences. Established in 1982, the medal is named in honor of Waldo E. Smith, AGU's first Executive Secretary, who worked tirelessly to promote geophysics on the national and international scene. The medal is presented to one individual in alternate (even) years.